This article delineates the ways in which the context of institutional and non‐institutional racist practices, legitimated by the rise of extreme right‐wing populism and racism, affects immigrants’ everyday lives in Athens, Greece. In this research, I explored the transformations of immigrants’ settlement trajectories, coping strategies and tactics, and their bodily interactions when encountering racist violence at the local level, through extensive fieldwork in two case study areas in metropolitan Athens—Omonia and Nikaia. The article is based on previous work on encounters with difference and everyday racism, with the aim of contributing to existing scholarship by examining urban encounters with manifestations of racism in the form of violent practices, which are on a rise not only as exceptional but also as everyday lived events. I demonstrate how immigrants’ encounters with police raids and patrols, and with racist violence perpetrated by neo‐Nazi militias, transform immigrants’ daily lives in the city at the micro‐scale. These encounters have an impact not only on immigrants’ social relationships, strategies and tactics of settlement, but also on the reconstruction of urban space. My argument is that urban encounter remains an open and dynamic field for negotiation of interethnic cohabitation, as it produces both violent confrontations and sociospatial embodied opportunities for coexistence. 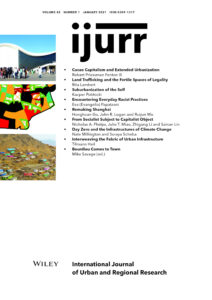