Imagining decolonized cities creates space to explore how urban places could strip away colonial dominance and restore the ability of Indigenous people to live, know and be. In this essay, we describe one attempt to create such space. While working in Porirua in Aotearoa New Zealand, we ran an urban design competition, hosted workshops with young people and held a symposium. Through all three phases we drew on utopian thinking to imagine beyond the current constraints of urban form in Aotearoa New Zealand to consider how cities might reflect the diverse realities of Māori. While this approach is an attempt at generating hopeful geographies, it also sat in tension with (post)colonial realities, such as racist attempts by white people to claim Indigeneity, and the ongoing need for land to be returned to Indigenous people. We argue that envisioning how cities might be decolonized is useful and needs to be rooted in the particular politics of place, but this imagining needs to be paired with action to confront persistent colonialism. 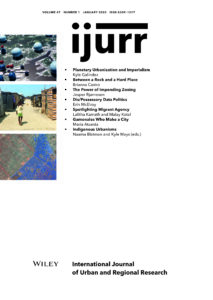