In the early stages of welfare planning, the Kuwaiti state restricted equal access to its housing programs in neighborhoods outside the city. The subsequent demographic shift, caused by a Kuwaiti exodus to the ‘suburbs’ and non-Kuwaiti urban labor migration, prompted calls for housing schemes to encourage city living for citizens. Georges Candilis’s proposal for a residential neighborhood in Kuwait City emerged from this context. This article examining Candilis’s unrealized project also offers a critical perspective on Kuwait’s unbalanced housing policies. From this analysis, it draws observations on the role of architects and their limited impact on policies established by decision-making networks within the welfare state. Seen from this perspective, the Candilis project bears witness to broader socio-economic agendas that privileged some groups while marginalizing or excluding others. 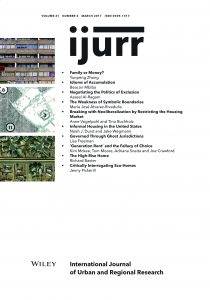