In this article, I argue that the ecologies of urban India are constitutively casteist, by which I mean that caste is sedimented into the land, water, and waste of India’s cities, with their outcaste bodies of Dalits often providing the critical infrastructural labor necessary for the social reproduction. The casteist ecologies of urban India were cast into sharp relief in 2016 when vigilante Hindu Right cow protectors ruthlessly flogged four Dalit youths as they were doing the stigmatized outcaste labor of disposing of dead cows. The focus of this article is the Dalit struggle that emerged in the wake of this flogging incident to annihilate the casteist logics that undergird India’s urban metabolic flows. This struggle nurtures confrontational Dalit subjects who mobilize annihilation as a force of justice to enact urban abolition ecologies that refuse the treatment of Dalits as less-than-human while also cultivating ethical relations with the other, including the more-than-human other. In this article I build on the abolitionist imaginaries of Dalit struggles to argue that everyday processes of subjectification must be at the analytical center of urban political ecology, and of urban theory more broadly, because subjects, through their everyday incremental and imaginative acts, play a vital role in shaping urban futures. By paying attention to the everyday praxis of refusal and responsibility that constitutes Dalit subjects as planetary subjects who embody a relational ethics of planetarity, I conclude the article by suggesting that the urban theory that we need for our time—a time of the planetary turn in urban studies—is one that approaches the urban through the topos of planetarity. 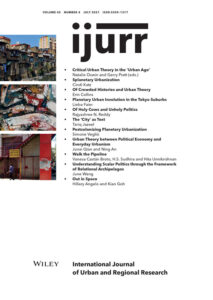