In times of austerity, gentrification is promoted as a prime investment opportunity capable of reviving stagnating local economies. In Athens, pro-gentrification policies (using English slogans like ‘Re-launch Athens’ and ‘Re-activate Athens’) have become increasingly defined in their targeting of specific areas. Moreover, planning in Greece is characterized by spontaneity, fragmentation and tolerance of speculation, specifically favouring the gentrification process. In many cases, the state’s ‘absence’ after promulgation of regeneration projects acts as a clear strategy for inner-city gentrification. After discussing the emergent relations between state policies on urban intervention and gentrification in the post-crash era, this article will focus on the peculiarities of the Greek planning system and how these have led to the gentrification of an inner-city area called Metaxourgio. 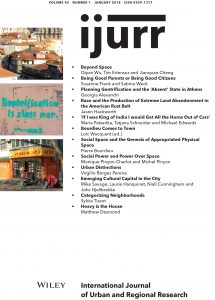