This article excavates the debate that unfolded during the 1980s between Jacques Rancière and Pierre Bourdieu to shed light on the theoretical divide that still cuts across the field of urban studies today. Looking at contemporary Rancièrian scholarship through a Bourdieusian lens, it points to their main theoretical shortcomings and reasserts the value of relational, field‐based and empirically grounded approaches to urban politics. At the same time, this article engages seriously Rancière’s critique of Bourdieu’s failure to account for space in order to question the territoriality inherent to the notion of field. We put this theoretical discussion to the test of Lagos’s garbage. Drawing on an ethnographic study conducted in Lagos from 2015 to 2016, we propose analyzing the process of spatialization of the field of local representation by looking at the ways solid waste—here conceived as a political opportunity—is mobilized by different actors. We argue that the deployment of a waste infrastructure in Lagos is congruent with a relative disinvestment in practices of territorial control that reshapes the structure of local representation, reconfiguring the ‘stage’ on which politics is played out in the Nigerian metropolis. 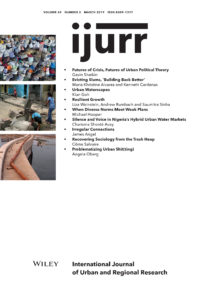