How do cities determine who has the right to station themselves in iconic public spaces? This article explores this question by analyzing the evolution of Barcelona’s approach to regulating street performance, with a particular focus on regulations pertaining to ‘living statues’. Although most buskers have been expelled from the Ramblas, one of the city’s most emblematic walkways, living statues remain permitted on the promenade. This, I argue, is due to the general embrace of statues as part of local tradition and their integration within city‐branding campaigns, as well as their own organizing and boundary work. As the image Barcelona seeks to cultivate has changed, however, the right of statues to station themselves in public space has become ever more tenuous. My findings speak to broader questions regarding how cities determine the boundaries of ‘urban desirability’, as well as why and how such boundaries change over time. They also elucidate the strategies that groups located at the margins employ in attempting to position themselves favorably in relation to such boundaries. More generally, they highlight how current approaches to analyzing urban inclusion and exclusion may benefit from a more sustained engagement with the burgeoning social scientific literature on symbolic boundaries. 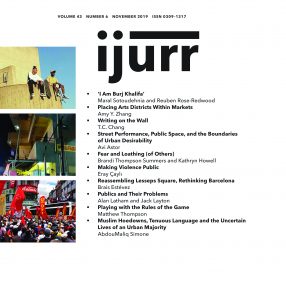