This article assesses the impact of armed conflict on the drinking water service of Basrah from 1978 to 2013 through an ‘urban warfare ecology’ lens in order to draw out the implications for relief programming and relevance to urban studies. It interprets an extensive range of unpublished literature through a frame that incorporates the accumulation of direct and indirect impacts upon the hardware, consumables and people upon which urban services rely. The analysis attributes a step-wise decline in service quality to the lack of water treatment chemicals, lack of spare parts, and, primarily, an extended ‘brain-drain’ of qualified water service staff. The service is found to have been vulnerable to dependence upon foreign parts and people, ‘vicious cycles’ of impact, and the politics of aid and of reconstruction. It follows that practitioners and donors eschew ideas of relief–rehabilitation–development (RRD) for an appreciation of the needs particular to complex urban warfare biospheres, where armed conflict and sanctions permeate all aspects of service provision through altered biological and social processes. The urban warfare ecology lens is found to be a useful complement to ‘infrastructural warfare’ research, suggesting the study of protracted armed conflict upon all aspects of urban life be both deepened technically and broadened to other cases. 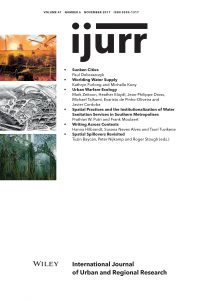