It is my pleasure to introduce IJURR’s May 2021 issue and this rich set of articles on access to territory and space. Drawn from empirical research carefully conducted in Denmark, Australia, India, the UK, China, Mexico, the US, and Canada, these pieces address questions at the core of critical urban studies: how is access to property and space negotiated, institutionalized, and contested? What are the discourses, administrative regimes, governance practices, and forms of resistance that shape who gets access to which spaces and for what uses? The pieces each highlight specific issues of access in particular locations – from stigmatized housing estates in Denmark, to property titling offices in Gurgaon, to urban farms in Portland and Vancouver – but, collectively, they reveal the means by which cities’ uneven geographies are produced, sustained, and can be dismantled.

The first two articles draw from cases in Australia and Denmark to address issues of territorial stigma – specifically, how places come to be stigmatized and what strategies are invoked to remove the stigma. Alistair Sisson argues that quantification and statistics have played an as yet under-recognized role in producing the stigma on certain neighborhoods and urban areas. Based on analyses of public housing policy documents and discourses in Sydney, Sisson demonstrates how statistics are deployed to portray housing estates as pathological and tenants as undeserving, and thereby legitimate privatization, displacement, and punitive policies. Troels Schultz Larsen & Kristian Delica, on the other hand, shed light on the practice of territorial de-stigmatization. Based on interviews with property managers in 40 stigmatized housing estates in Denmark, the authors find that the destigmatizing efforts can be undercut by national policy, in which stigmatization remains integral to the governance of advanced urban marginality.

The next two articles highlight formal and informal property titling programs Indian cities, thus contributing to what might be characterized as “contested property studies.” Thomas Cowan draws from ethnographic research with land surveyors and revenue bureaucrats in Gurgaon, North India, to examine the utilization of “property technology.” Cowan finds that digital tools are wielded not to reflect but rather to author property claims. Focusing more on the impacts than the technologies of property titling, the piece by Indivar Jonnalagadda, Ryan Stock, and Karan Misquitta highlights programs that distribute titles in the South Indian city of Hyderabad. Countering the tendency to either ignore or dismiss titling initiatives as failures, they find that these de facto land tenure programs can improve property governance and offer a form of subaltern citizenship to urban and rural poor residents.

Three articles in this issue also highlight the governance practices and contestations that shape decisions about who has access to urban space and who has the power to shape those decisions. Based in Mexico, the US, and Canada, these pieces highlight contestations over public space and the governance regimes that determine uses of land for bicycle infrastructure, urban food production, and food vending. Oscar Sosa López conducted research on Ecobici, Mexico City’s bike share system, and thereby puts the urban citizenship literature into conversation with the green policy mobility literature. Sosa López finds that the means by which Ecobici was implemented ultimately excluded citizens from the planning of bicycle policy, and limited Mexico City’s poorer residents from enjoying these new investments. In contrast, McClintock et al.’s article finds that urban agricultural governance can create opportunities to engage with, push back against, and step beyond the imposition of hegemonic models of urban agriculture, and encourage researchers to pay attention to forms of negotiation of and resistance. Amy Hanser, meanwhile, emphasizes the role that urban cultural politics can play in shaping discourses and regulations governing the allocation of public space. Based on research on food vending in Vancouver, Canada, Hanser finds that ideas about “good” food have expanded to include conceptions of health, environment, economy, cultural diversity and creativity, as well as community building, local identity and visions of vibrant, shared public spaces, thus creating the conditions for the rapid expansion of food vending and disproportionate space allocated for elite tastes.

The two final articles profile seemingly innovative models of urban governance in China and the UK to reveal the role that institutional contexts can play in reproducing exclusionary modes of decision-making. The piece by Ying Wang and Nick Clarke, based on ethnography and interview in 32 different neighborhoods in Nanjing, China, highlights the diversity of neighborhood governance models. Even within a single city, Wang and Clarke warn against generalizing about models of governance and emphasize the character of policy evolution in particular neighborhoods. Victoria Habermehl and Beth Perry similarly emphasize the importance of looking at actually existing institutional contexts when examining co-production models of governance. Drawing on research conducted in Manchester, UK, the authors identify a practice they call “austerity co-production,” by which resource scarcity and fragmented forms of expertise constrain more innovative approaches to the governance and politics of the city-region.

Revisiting classic debates about the production of urban space, including the role played by cultural discourses, governance practices, and administrative regimes, this issue offers empirically grounded, often novel perspectives on an evergreen set of concerns. Read together, these articles can help us understand and hopefully overcome entrenched patterns of spatial exclusion and the means by which they tend to be reproduced at the urban scale.

Four Modes of Neighbourhood Governance: The View from Nanjing, China

Michael Sorkin 2018: What Goes Up: ‘The Rights and Wrongs to the City’. London and New York: Verso 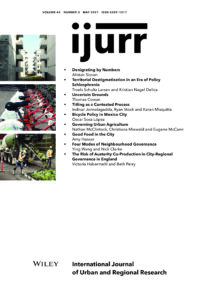