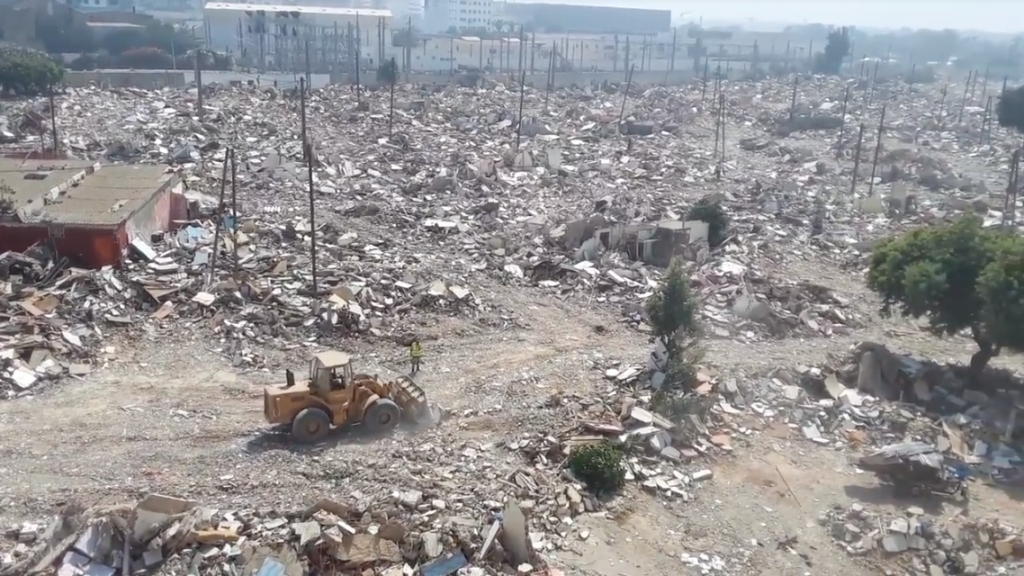 On Friday, September 21, 2018, a huge police operation evicted the entire neighbourhood of Douar Wasti, in the middle of the former industrial area of Ain Sbaa, on the northern shoreline of Casablanca in Morocco. Residents of the circa 1,500 houses of the douar were forced to collect their belongings at very short notice and to leave, as the bulldozers began the demolitions. Two days later, only the ruins remained of a neighbourhood of 5,000 people, until then a thriving area. Most residents had to find accommodation in the houses of parents and friends, while several camped on the area to manifest their anger, surrounded by mountains of garbage and ruins, their personal belongings scattered around the demolition site. The demolition and expulsions were for the most part uncovered by the Moroccan press and TV.

It is difficult to reconstruct the trajectory of the negotiations with the government, and the status of land tenure in Douar Wasti: the future of the neighbourhood has been contested since the 1980s (see Aarif, 2001). What is clear is that the residents did not expect such a massive deployment of police force, including helicopters and snipers from surrounding buildings. The experience of being targeted by the same forces they considered their defence, they declared, severed their feelings of allegiance to the state and to the Monarchy, the latter rarely challenged even by dissidents. Many now feel pushed to emigrate, a feeling displayed in their attempts to march in protest, together with other residents threatened by eviction, to the Spanish enclave of Ceuta 400 km away to symbolically demand asylum.

Their situation is not unique. Casablanca, Morocco’s economic capital, is suffering rapid gentrification, which involves the demolition of “bidonvilles”, a term now referring to any kind of dwelling positioned in economically exploitable areas (see Navaez-Bouchanine 2003; Rachik 2002). The 2004 project Villes sans bidonvilles aims to wipe out self-built dwellings in all Moroccan cities by 2020, and Casablanca is undoubtedly the most important focus of action (UN-Habitat 2011). Historical areas such as Karien Central in the neighbourhood of Hay Mohammedi, itself an area of resettlement of people displaced from the centre during the French protectorate, has been cleared over the last decade. The inhabitants were moved to scarcely served peripheral areas, often near cemeteries or garbage dumps. The government offers either flats in new buildings or plots of lands with permits and finances to build.

The government’s campaign against informal housing even began to consider some parts of the historical centre of Casablanca, the medina,first for the construction of the disproportionate Hassan II mosque, the second largest in the world, very close to the city centre (Cattedra 2001); then for the opening of the huge Avenue Royale, which aims to connect the mosque to the business district. Some of Casablanca’s densest areas are being cleared, in an evisceration with echoes of Haussmann’s boulevards or Mussolini’s via della Conciliazione in Rome (Berry-Chikhaoui 2010; see Lees, Shin and Lopez-Morales, 2016: 50-51, on the relationship between Haussmannization and planetary gentrification). Even formally planned neighbourhoods, such as the old area of El Hank, near Casablanca’s lighthouse, fell into the category of the bidonville and were threatened with demolition (Asri 2017).

The significance of Douar Wasti lies in the speed and extent of the demolitions, and the fact that they were carried out before negotiations ended. Residents here have been offered plots of land 30km away from Casablanca, with no money to build. Being forced to move to the countryside is considered a grave offense by most of those who have been evicted; they remark on the importance of hadiriya, civilization, a concept descending (as in Latin) from the idea of urban environment. Many also consider the eviction as a betrayal of the new constitution voted in 2011, built around the concept of karama, dignity: by using this word, the evicted link to the vocabulary of the “February 20thmovement”, the Moroccan version of the 2011 Arab Spring, as well as to current uprisings in the Riff area. As always, urban policies reveal the relationships between government and its people, and protest over the use of urban space reflects political contestation at a variety of levels (see Bogaert 2018).

Poverty Alleviation and the Eviction of the Poorest: Towards Urban Land Reform in the Philippines
Erhard J. Berner