In the recent winter sessions of Parliament, India’s Bharatiya Janata Party (BJP), led by Narendra Modi, proposed and successfully passed the Citizenship Amendment Bill (CAB), which was then signed by the President to become the Citizenship Amendment Act (CAA). Angered by the nature of the act, people have been protesting in large numbers from every corner of the country, reminding the government of the secular values safeguarded by the Indian Constitution. In this Urban Now essay, I discuss the Amendment and the forms of resistance it has encountered.

Purportedly intended to solve the problem of “refugees” and “infiltrators”, the CAA is an amendment to 2002 Citizenship Act. Followed by a baseline survey of India’s entire population, the National Population Register (NPR), the Act introduces the National Register of Citizens (NRC) which requires residents to prove their citizenship by providing either a birth certificate, a passport or a tenth class mark sheet. Statements on different occasions by the Home Minister Amit Shah have suggested various changes to this list of proof documents, increasing uncertainty. What appears certain, however, is that the CAA is designed to allow the presence of non-Muslims, such as Hindu, Sikh, Christian and Jain refugees from Bangladesh, Pakistan and Afghanistan. Meanwhile, the government has also begun to build detention centers for the undesired refugees to reside till their deportation. 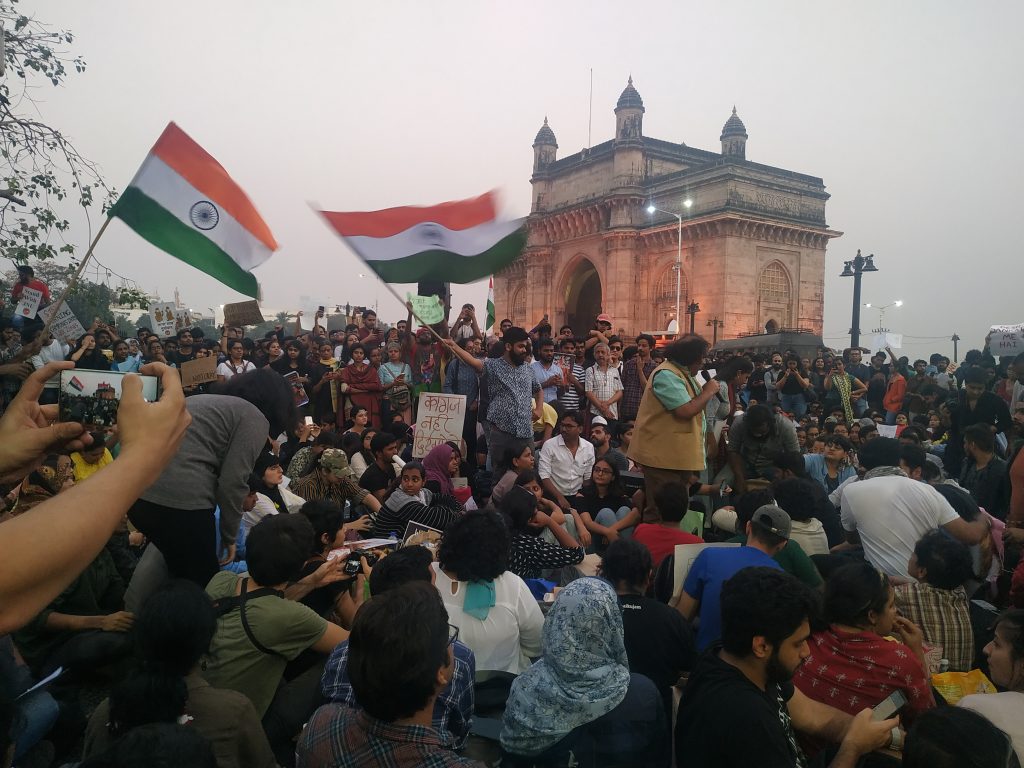 As per the Home Minister’s statement, people failing to prove their citizenship in the NRC will be recorded and among these everyone will be given citizenship except for Muslims. Though the government has no answerable logic in selecting only refugees from Bangladesh, Pakistan and Afghanistan, it justifies the exclusion of Muslims by arguing that they form the majority in these nations and are therefore not facing any persecution.

An average Indian’s concern to protest on the streets, facing significant police brutality, goes beyond the unjust exclusion of Muslim refugees from these countries.

India has a considerable share of tribal and indigenous communities who are already experiencing structural exploitation and violence. Due to their remote location and limited presence of the state, primarily aimed at extracting minerals, members of the tribal communities may have few of the required documents. Failing to submit the required documents to prove their citizenship, millions of tribal and indigenous people face the threat of ending up in detention centers.Some have also expressed the fear that women and members of the LGBTQ community may also face the brunt of the CAA and the NRC.The NRC was carried out in Assam state, where1.9 million “infiltrators” were found. Surprising the government, an estimated 1.3 million of those found were non-Muslims and mostly Bengali Hindus – the vote bank of BJP in Assam. Why is BJP pushing for the implementation of the act, despite the backlash?

The CAA is a major step towards the ambitious project of Hindu Rashtra (Hindu Nation), articulated by the BJP and its parent organization, Rashtriya Swayaksevak Sangh (RSS). The BJP is the electoral political wing of the RSS, which has many subsidiaries in different fields that together promote Hindu supremacy in India. The RSS and its affiliate organizations together are called Sangh Parivar. The founding fathers of the RSS were enthusiasts of European fascist leaders such as Hitler and Mussolini, praising Hitler for his ambition of one leader, one nation and one race. Gandhi’s assassin Nathuram Godse was part of the RSS and co-conspired the murder based on his opposition to Gandhi’s secular views and to his agreement with the Partition of India in 1947. Sangh Parivar’s Islamophobia is evident in its framing of Muslims as invaders and outsiders who have no right to be in India after Partition. In a recent police action in Muzaffarnagar in Uttar Pradesh, threats were made to Muslimssuch as “Muslims have only two places, Pakistan or Kabristan [burial ground]”.

Since the BJP came into power at the central level under Modi’s leadership in 2014,Hindu nationalists have been flexing their muscles by increasing their cadres, attacking minorities, incarcerating and killing activists, rewriting history and disseminating propaganda fake news through social media. Representatives of the RSS and Vishwa Hindu Parishad (VHP, a right-wing Hindu militant organization) openly claim that they despise the Indian Constitution. RSS and VHP have created paramilitary troops, training and indoctrinating young children to support the goal of achieve Hindu Rashtra by offering lessons that include handling loaded weapons and demonizing the Muslim community. These Hindu extremist organizations seek actively to subvert the constitutional values set out by the founding fathers BR Ambedkar, Mohandas Gandhi, Jawaharlal Nehru, Sardar Patel and Abul Kalam Azad, who envisioned India as a sovereign, secular, socialist democratic republic.

These efforts have gone largely uncontested by the media and the judiciary. The Modi government has been successful in bullying –and buying– much of the mainstream media into compliance. Various media outlets have not only been uncritical of the government, but have also partnered with the BJP to propagate fake news and misleading narratives aimed at discrediting the political opposition, activists and intellectuals. Even when the Modi government abrogated Article 370, withdrawing the special “autonomous” status of the state of Jammu and Kashmir, and deployed the military and established a curfew in that state, the mainstream Indian media either ignored this or covered it as normal. Noncompliant media networks are not given any interviews by the BJP’s top leaders, while others have had to deal with defamation cases claiming millions of dollars in damages.

Over time, the judiciary has also failed to be an effective check to the government’s power. In certain historic cases – such as that related to the demolition of the Babri Masjid mosque in Ayodhya by a Hindu mob under the supervision of BJP, RSS and VHP leaders – the highest court of the land passed verdicts that support the ruling party’s interests. The pro-Hindu verdict in the case of Ayodhya was not only a deep injustice to Muslims, but also shook the confidence of other minorities in India’s fading secularism. Autonomous institutions such as the Central Bureau of Investigation (CBI) have been co-opted and used as means to target opposition leaders and influential dissenters.

Thus, in a democracy where the designated institutions are failing to uphold the constitutional values, scores of people have taken to the streets to protest the government’s actions. This historic movement is secular in a fashion that has not been witnessed since independence. Though there were misleading narratives and fake news attempts to isolate Muslims in the ongoing resistance movement against the CAA, many people have come to see that the major threat to Indian constitution is posed by the ruling party itself, and its affiliated organizations.

Raising their voices in dissent against the unconstitutionality of the enacted law, which disturbs the secular fabric of the nation, huge numbers of people have joined demonstrations and rallies in several cities. Starting in Delhi,and spreading to many other cities including Mumbai, Hyderabad, Bengaluru, Nagpur and Chennai, people have taken to the streets, sloganeering, singing and rallying. In several cities, Section 144 of the Code of Criminal Procedure has been rolled out, placing restrictions on carrying arms, and prohibiting public gatherings. The state machinery has cracked down upon the protesters, which included students, beginning with infamous incidents of state-sponsored violence against students at Jamia Millia Islamia and Aligarh Muslim University, and eventually progressed towards intrusions, stone pelting and confiscation of property in Muslim neighborhoods in several cities in Uttar Pradesh. From the beginning of the mobilizations, protesters in Delhi have constantly dealt with brutal repression by police forces, yet this has not deterred growing numbers of protesters from taking to the streets.

In contrast to the mainstream media, social media and a handful of critical media networks are covering these events on the ground. Meanwhile, in Uttar Pradesh, in the absence of adequate media coverage, the state’s crackdown on Muslim-dominated neighborhoods is sending waves of horror among the people. Some of the videos circulated on social media show police parading, smashing vehicles, pelting stones to break windows and glasses and banging doors, in what were claimed to be Muslim-dominated neighborhoods in cities such as Kanpur and Lucknow. At the time of writing 18 people have been killed in Uttar Pradesh due to bullet injuries in the ongoing CAA protests.

Even as the elected opposition, autonomous institutions and the media failed to act as an effective check to the ruling party, and as the judiciary proved ineffective and passed historic judgments serving the politics of the ruling party, large numbers of people in cities across India are voicing their – mostly peaceful – opposition to the unconstitutionality of the amendments made to the secular nature of the Indian Constitution.