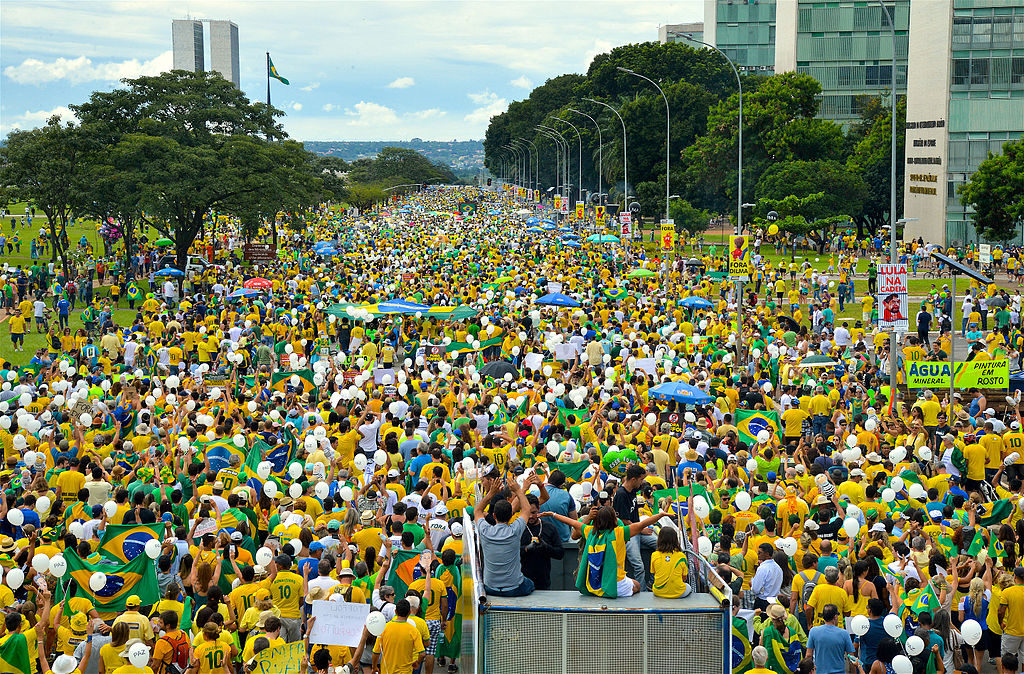 Much has been said recently about Brazil’s 2018 presidential election, relating it to a range of different factors, such as populism, fascism, religion, conservative ideologies, and so on. A key issue that has been identified as an unprecedented aspect of this election is the Whatsapp campaign run by Jair Bolsonaro’s team. This strategy has been discussed extensively, also in comparison to recent US elections, and noting the differences between the role of Facebook and Whatsapp in political campaigns. In this brief essay, however, I seek to trace an urban genealogy of the ideas and aesthetics that circulated in the myriad images, memes, and videos shared through Whatsapp in the 2018 elections.

Since 2013, political protests and demonstrations have been a heavy presence in Brazil’s streets. This wave of protests first started in the context of the mega events organized from 2011 to 2016, but many different issues – going beyond the scope of this essay – led to a constant occupation and contestation of the Brazilian streets by a range of political groups, and aimed at heterogeneous publics.

Turning to the massive production of posters and banners displayed during these street protests, it is not difficult to notice the continuity between that material and the images, memes and videos circulating on Whatsapp during the 2018 presidential campaign. In both cases, their content and aesthetic raise the question whether the key terms and topics used to frame public problems emerged spontaneously, or whether they resulted as part of the conscious strategies of policy institutes (such as thinktanks) and government agencies, including military intelligence. Such a strategy would have to have been so well formulated that its simple and seemingly improvised aesthetic served as the most central element of its politics of authentication.

The 2013 protests – certainly the starting point of this process – took place in the context of the Confederation Cup in Brazil. A diffuse and heterogeneous crowd took to the streets to highlight countless concerns, from increases in the price of public transportation (the urban trigger of the 2013 demonstrations), to government corruption, abuses in electoral campaign financing, police violence, information manipulation by mass media corporations. For the first time since the end of the Military Dictatorship (1964-1985), open calls for military intervention were also being made on the streets. A strong antipathy toward political parties and organizations also began to grow: the crowds in 2013 would not allow any kind of political flags on the streets – only “spontaneous” and “improvised” posters and banners.

From 2013 until 2018, these diffuse and heterogeneous crowds began to reassemble into more focused street protests, mobilizing for and against specific topics, in particular after the start of Dilma Rousseff’s impeachment process in 2016. In 2018, during the presidential election, the biggest street demonstrations were those against Bolsonaro. But online, where thousands of people met 24 hours a day, every day, Bolsonaro’s campaign was much more efficient in converting the public discussion staged on streets from 2013 to 2018 to a digital form. They transferred the aesthetics of spontaneity and improvisation found in street protests into the digital material, ensuring a collective experience of engaging in a cheap campaign, made and “shared” by each voter. This material focused on a few main topics and offered clear, simple explanations for the origins of each public problem presented (communism, feminism, “gender ideology”, corruption, and so on), as well as solutions. We might just call this “fake news”, and leave it at that. But this, I believe, is not enough. To understand and address this more fully, we still need go deeper in our analysis of how streets and social media connect, not only in terms of mobilization and content, but also by attending to the politics of aesthetics and the aesthetics of politics on the streets.