How to balance policy experimentation for economic development with border control for national security is an issue that remains unresolved. Addressing this question, the article analyzes policy experimentation in Chinese border cities and how such experimentation is territorially reflected in and promoted through border control—a selective process that involves both softening and hardening the border. The case study is Ruili in Yunnan province, a border city adjacent to northern Myanmar’s Shan and Kachin states. With the approval of higher-level governments, Ruili has already begun experimenting with policies to promote cross-border trade. One key initiative has been to move customs clearance away from the border to customs checkpoints within the city, giving rise to a special situation of ‘inside territory and outside customs’. However, this neoliberal policy of trade facilitation also generates new administrative loopholes which facilitate two-way smuggling across the border. Border control provides the conditions through which border cities experiment with new policies in trade, investment and manufacturing, while enforcing sovereign power against clandestine business under the guise of national security. This article contributes to our understanding of the theoretical synergies between urban entrepreneurism and border politics by developing a territorially sensitive reading of the implementation of experimental policies for economic development. 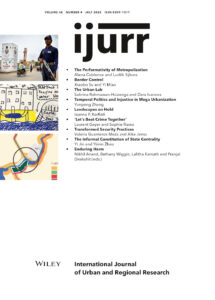