The article offers a fresh, empirically grounded look at the spatialities of crisis‐triggered employment forms—a largely overlooked issue in contemporary critical geography literature. Specifically, it discusses the interconnection between investment flows from manufacturing to the built environment (capital switching) and underemployment in urban metropolitan regions to substantiate its impact on emerging spatial fixities. The article, which is based on an empirical analysis informed by a radical political economy, investigates changing fixed capital formations in Greece over an extended period prior to and during the recession, from 1995 to 2012. It traces the evolution of part‐time waged work in the capital metropolitan region of Attica (Athens) vis‐à‐vis the rest of the country’s regional labour markets, focusing on the polarized 2005–2012 period and the demise of the construction industry. The article highlights that ‘disrupted’ capital switching that occurred in Greece, closely associated with recalibrated sectoral priorities and institutional interventions, resulted in the uneven sprawling of underemployment. Our findings offer insight into how the dismantling of spatial fixes within core metropolitan regions of the southern European Union (and beyond) are connected to labour surplus and successive slumps in manufacturing and construction. The article closes by calling for new theorizations of contemporary urban regional unevenness and its spatiotemporal fixities, which account for the role of changes in labour turnover time. 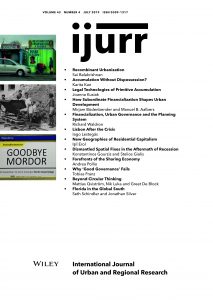