This article argues that symbolic boundaries and their spatial manifestation into embedded enclaves have become new forms of urban social exclusion. Based on participant observation and interviews among lower‐ and middle‐/upper‐class residents in the city of Sari, Iran, the article analyzes how the poor’s physical circulations in the city and their performances of class and status have led to an elite backlash, as the latter find more refined markers of social separation in an effort to bolster their own exclusivity. Social distancing through the denigration of the poor and the construction of embedded enclaves brings to the fore the class tensions that are temporarily masked by the urban poor’s spatial practices and cultural mimicry. As an advanced form of codified status inequality, embedded enclaves rely on the poor’s citywide circulations and on increasing inter‐class interactions in order to communicate difference. Embedded—rather than cordoned off—in prominent areas of the city, such enclaves function as a reminder to the poor of all they cannot have. The upsurge of such establishments in the wake of Iran’s shifting economic environment represents an attempt to shore up social position and restore the status quo. 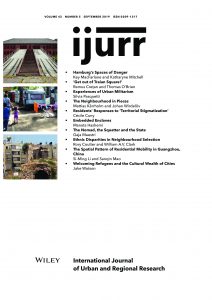