Inner-city areas function as incubators of creative industries in metropolitan cities. The areas adjacent to Tokyo’s city center also play an important role as a location for small to medium-sized creative industries. First, against this background, this article explores the relationship between the characteristics of locations of creative industries and Tokyo’s built environment. Aside from the city center itself, where the creative industries’ major customers are located, the authors observed a creative industry cluster to the west of the city center. We named this area the Tokyo West Creative Industry Cluster (TWCIC) and found that a ‘live–work’-style cluster has developed there, which functions as an incubation place for creative industries. Second, by conducting a case study on urban regeneration in progress in the Shibuya Station area, a core area of the TWCIC, we further examine how gentrification caused by property-led urban regeneration is now threatening the TWCIC. The article concludes that commercialization and purification will eventually widen spatial inequality and lead to the loss of the unique culture of tolerance and freedom that has hitherto nurtured the creative culture in TWCIC. Consequently, fundamental changes are required in property-led creative city policies. 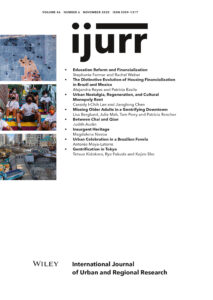