Recently, debates about the future of Austin’s housing policies have been reshaped by the rise of a vocal group of well-organized and self-styled YIMBYs. In particular, this group has been important in the restructuring of political coalitions that both support and oppose the Urbanist elements contained in the ongoing land-development code (LDC) reform effort, especially the realignment of mainstream environmentalists. One significant stake in this effort is the fate of neighborhoods closest to the central business district, historically home to lower-income people of color. We show how the political configuration of the two coalitions represents a major reshaping of longstanding political alignments in Austin and suggest that stalwart alliances are giving way to new ones, both here and elsewhere; yet, these realignments hold little promise for addressing issues of equity, despite the fact that addressing racial inequalities has been a central concern in debates over the LDC on both sides. We note the increasing limits of growth machine theory in accounting for this change for two reasons: (1) changing attitudes among mainstream environmentalists towards Austin’s urban redevelopment; (2) the persistence of racial and class differences in shaping the unevenness of Austin’s future neighborhood development. 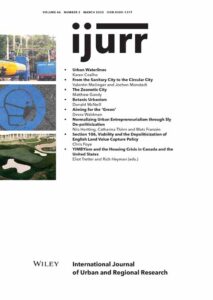