The Covid-19 pandemic and subsequent lockdown regulations in South Africa, have laid bare the depth of the deeply intrenched socio-economic and spatial inequality that persists in post-apartheid South African cities, such as Cape Town. The word lockdown invokes a sense of panic, and urgency amongst many – from panic buying to stockpiling medical supplies but also to working quickly to assist with the inevitable health, economic and social impact of the various national lockdown regulations on the most economically vulnerable.

As a PhD researcher, this lockdown anxiety extended to worries around fieldwork and well planned research timelines. A pertinent piece of advice which I received from a colleague during the haze of trying to salvage what was left of my fieldwork plans was a quote from Bayo Akomolafe – “the times are urgent: let’s slow down”. While taking this advice to slow down, which became necessary to rethink elements of my fieldwork due to a lack of access to my field site for over a year, the ability to slow down and take stock is a luxury reserved for a few, particularly those with the economic and social means to slow down. I was privileged to be able to slow down; however, for many of my fieldwork participants, this was not an option.

My current research is located in the intersection of urban planning, power and food with a focus on the role of spatial planning in enabling access to affordable food in low-income areas. My specific field site is located in Langa, Cape Town, which is located 12 kilometres outside the city centre. Langa is arguably the oldest township area in South Africa and was initially developed following the outbreak of the Spanish Flu in the Cape in 1918. This outbreak was used to further entrench the narrative that Black South Africans were carrying diseases, which accelerated and reinforced the existing agenda for a racially segregated city (de Satge & Watson, 2018). As a result, Black residents were forced to move to what is today known as Langa. I have had a relationship with this neighbourhood since 2016 when I began my Masters research. Through my work and previous research in Langa, I have been able to maintain and nourish friendships with participants and colleagues. It was through one of these friendships that I realized how luxurious and indulgent slowing down to reassess my approach to fieldwork and PhD as a whole could come across to those who are not afforded the luxury to slow down and pause.

For example, Mzi, who lives in Langa with his young family, has done the opposite of slowing down. In the space of a year, he has lost and started a new job, opened his own business (The Langa Bicycle Hub), worked to develop a bicycle food delivery service to deliver food to the elderly in Langa and continued his ongoing support for his family. Mzi had to do the antithesis of slowing down. 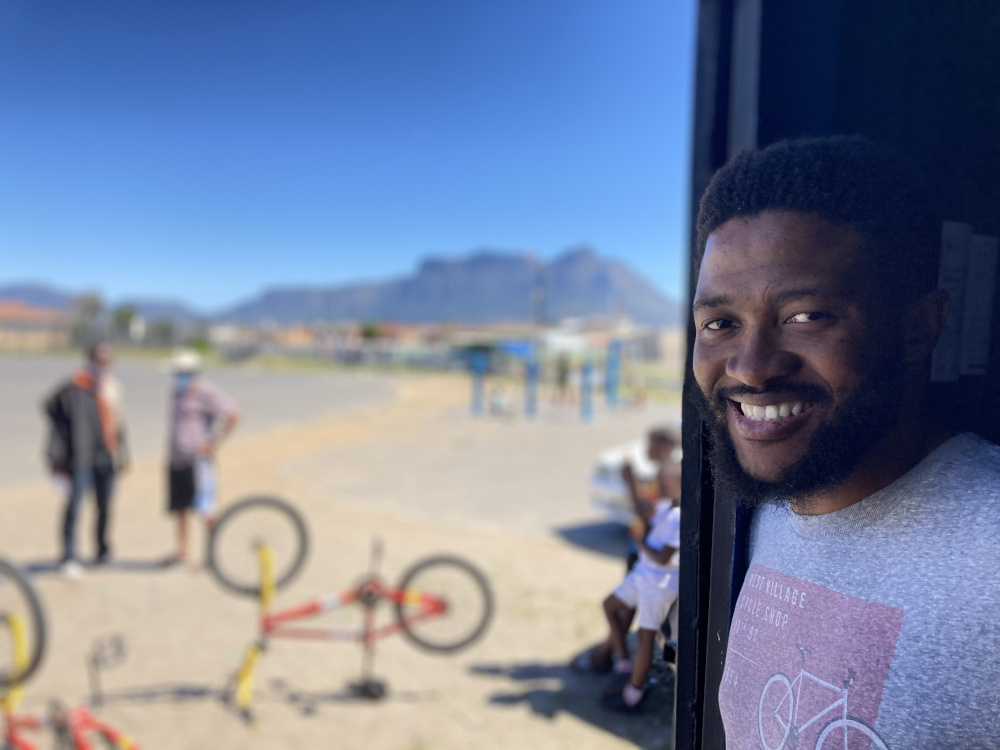 Impact on my PhD research

Searching for Relevance
As has been mentioned, the lockdown regulations laid bare the persistent socio-economic and spatial inequalities in Cape Town. One particular example of this is in relation to access to sufficient, affordable food particularly in low-income areas. While food insecurity has been a consistent issue in Cape Town, it has had difficulty in finding a home for the mandate of addressing food insecurity within the local government. While spatial planning is one department that can assist, it is not necessarily the mandate of planners in the city. Suddenly, during lockdown, access to healthy, sufficient, affordable food became a top priority for policy makers and civil society organizations alike. So, while there were clear arguments relating to the lack of uptake on the food mandate which I could have weaved into my research, this seemed slightly irrelevant in the lockdown moment. Slowing down meant being forced to sit with the discomfort of the potential irrelevance of previously completed fieldwork, the uncertainty of funding and completing the remaining PhD research, as well as time spent lingering in the realization that work still needs to be completed.

More Haste Less Speed
After accepting the need to keep moving, albeit at a slightly slower pace, the first step was to rewrite much of my proposal to include alternatives to the proposed fieldwork timeline. These amendments included virtual interviews, focus groups and participatory food mapping conducted via WhatsApp. In terms of ethical considerations, I made the decision not to undertake any in-person fieldwork until the national lockdown level had moved to Level 1 in South Africa (the least restrictive level). While digital platforms are a useful alternative to in person fieldwork, they do not provide the same level of immersion in the physical notion of “the field” and depth of observation that the physical field site allows. The level of spontaneity provided when immersed in the field disappears through these virtual media. For example, a meeting in an office with a city official can lead to a snowball of information by being asked to observe a planning meeting, or being introduced to a participant’s colleague who might be able to provide additional answers to my questions. When travelling to my field site in Langa, I can observe the change in housing typology – first through the quiet streets of the well-manicured, spacious suburbs of the previously White only neighbourhoods, and then past previously Black only areas, which seem close to bursting with people, cordoned off from the rest of the city, along the very highways that continue to segregate Langa from the city – these moments are part and parcel of being “in” the field.

Through the rethinking of my methods and ethical considerations, I began thinking through questions relating to the nature of fieldwork, what it means to be immersed in the field, to observe the field site, and the way in which the field site is imagined. Put differently, where does the field begin and end when the parameters of the field have been shifted to include the dimensions of the physical as well as the virtual?

Reimagining the Field
The notion of the field site or ‘the field’ has been interrogated by various authors, particularly those in the field of anthropology (Ingold, 2008; Gupta & Ferguson, 1997; Marcus, 1995). While this questioning of the field site and fieldwork is not novel, it does pose a different set of questions in the current context of a global pandemic. As young researchers, PhD students in qualitative research disciplines are trained to define a clear field and parameter of “the field”, to take detailed field notes and draw thick descriptions of observations made in the field (Collins & Gallinant, 2010; Geertz, 1973). The notion of undertaking fieldwork in itself is a significant portion of the PhD process. For PhD students in the urban and rural studies discipline, challenges arise in relation to studying space and place without physically being able to be in a place when movement is restricted under lockdown regulations.

For my research, the field site and the notion of fieldwork have shifted from what was the traditional approach to fieldwork and the field site as described above, to something that is far more flexible and fluid. The field site becomes not just the physical and the virtual particularly in times when much of the process of fieldwork is in flux. Recently, I have been able to return to the field, while still following Covid-19 protocols. Being back in the field has shown me that slowing down is not always possible, sometimes being immersed and engaged is more useful. Through the relationships I have with people in Langa, I was able to recently join Mzi’s Langa Bicycle Community Action Network (CAN) as a way to assist with soup kitchens in Langa, but also as a way to allow me to participate in a community that I’ve been fortunate enough to work in for five years. Through this process I have learnt a new speed which the CAN members refer to as “moving at the speed of trust”. This approach was what helped to solidify the solidarity that was shown during the initial stages of the lockdown, and allow for joint progress and survival through the lockdown period. 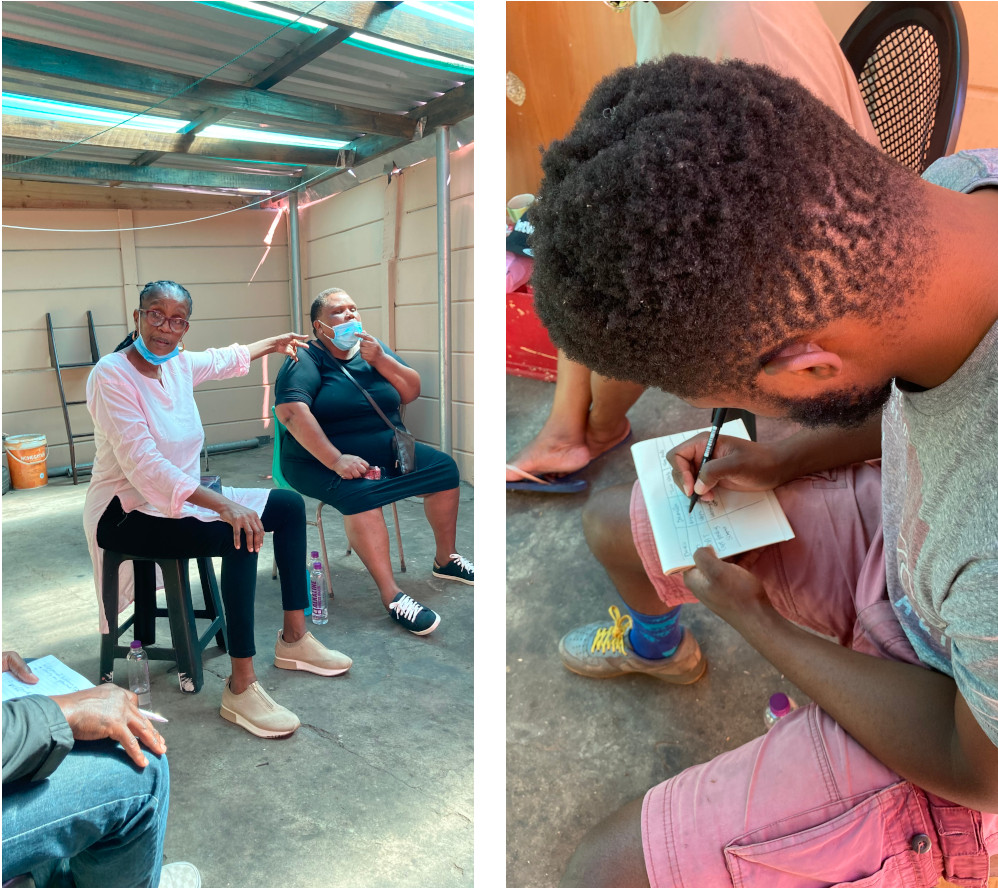 (Left) Mama Lulu at a Langa Bicycle CAN planning meeting. Ma’ Lulu has been running a soup kitchen out of her house since the start of the lockdown in 2020 for Langa residents; (Right) Mzi at a planning meeting for the Langa Bicycle CAN. The Langa Bicycle CAN, as well as other similar CANs were started across Cape Town were started during the hard lockdown in March 2020 as a way to ensure that Cape Town’s most vulnerable residents continued to receive financial and medical support and access to food through food parcels and soup kitchens. Photos: Alison Pulker.

Allowing for a reimaging of the field is a luxury, in the same way that being able to slow down in a time of panic is a privilege. As I’ve seen through my research, slowing down was not a possibility for those in precarious financial situations, rather “the hustle”, as Tatiana Thieme writes, must continue, something that Mzi personifies.

Rigorous research and fieldwork often require a degree of flexibility on the part of the researcher to follow a story, theme, idea or current moment. In the current context of the global pandemic, this has required a level of malleability many young researchers have not previously had to stretch their fieldwork skills to before but one that is not impossible and opens up significant opportunities to explore new ways of researching, collecting data, and being immersed in a field. In order to undertake the challenge of the current moment and recognize the opportunities it brings, perhaps slowing down of doing, writing, and processing before becoming immersed in field site(s) might be useful and possible for some. When slowing down is not possible, a reliance on others through reaching out for help, or through forms of solidarity and moving at “the speed of trust” might be more appropriate. With either approach, either slowing down, or asking for and accepting help through the PhD process, would allow for more careful, informed, generative and purposeful research.

Alison Pulker (Twitter) is a doctoral candidate at the African Centre of Cities, in the School of Architecture, Planning and Geomatics at the University of Cape Town. Her current research is located at the intersection of power, urban planning and food.

All essays on Becoming an Urban Researcher During a Pandemic

Related IJURR articles on Becoming an Urban Researcher During a Pandemic

ALL ESSAYS ON Becoming an Urban Researcher During a Pandemic