As IJURR’s Debates Editor, it is my pleasure to introduce our first “Spotlight On” web issue, focusing on the distinctively urban aspects of the ongoing refugee “crisis” underway in Europe, the Middle East, Southeast Asia, and Central and Eastern Africa. While European cities are now having to revisit longstanding questions of citizenship, community, and humanitarian responsibility in light of the current, and in many ways unprecedented, waves of migration, these questions have been the subject of longstanding debate and innovation in other parts of the world, where displaced people and asylum seekers have made temporary and permanent homes in cities for decades. This web issue seeks to globalize the discussion of urban refugees, drawing on cases and expertise developed in parts of the world that have not featured as prominently in the current news cycle, such as Lebanon, Thailand, Malaysia, Kenya, and Jordan.

The geographical breadth presented in this web issue partially explains our reluctance to adopt the widely circulating label “crisis” – a label that appears to have been applied only when the migration waves reached the shores of Europe. Furthermore, as Mona Fawaz points out in her essay, the word crisis suggests an exception, a condition outside of the ordinary state of affairs. Yet as Fawaz reminds us, Beirut’s history and urbanization processes, along with those in many cities around the world, are inseparable from the histories of war, ethnic violence, and persecution that have brought internally displaced people, refugees, and migrants there. Our reluctance also stems from the overwhelmingly negative connotations suggested by the word crisis. As several of the essays here demonstrate, refugees, like all migrants, bring creativity and innovation, friendship and community, and innumerable economic opportunities, along with increased pressure on social relations, urban infrastructures, local housing stocks, and labor markets. With nuanced insights on the experiences of refugees and the cities that house them, the essays included in this issue can help unsettle some of the dominant categories and emerging narratives being used to explain and interpret the impacts of this “crisis.”

The five essays reflect what Jansen in his essay calls the “modest urban turn” in refugee studies, which includes both studies of refugees and migrants in cities and analyses of exurban refugee camps as cities (see also Romola Sanyal’s essay for an elaboration of both aspects). While these aspects of the urban turn are distinct, both utilize theoretical insights and frameworks from critical urban studies to reveal the social relations, survival strategies, improvisations, and modes of claims-making utilized by refugees and asylum seekers. They also usefully disrupt or unsettle unhelpful dichotomies between the blurred and overlapping categories of the city and the camp, the refugee and the irregular migrant, and the host and the displaced person, among others. 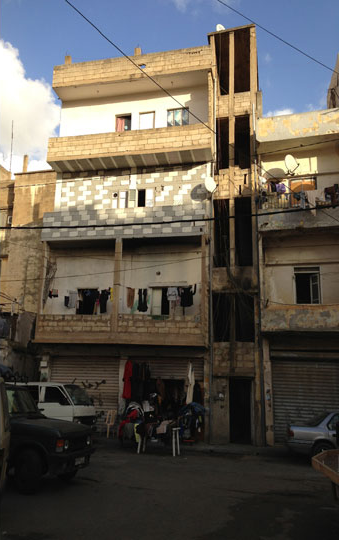 An example of incremental building processes where rooms and apartments were added on existing buildings to accommodate additional refugees in Nab‘ah, east of Beirut. Photo by Mona Fawaz.

Among the important themes highlighted here, several of the authors emphasize the agency and resourcefulness of refugees, as well as the creative ways they navigate the often indiscernible lines between informality and illegality to make their lives and livelihoods in the city and the camp. In doing so, most authors demonstrate that refugees and migrants draw upon local networks and existing social institutions created by humanitarian organizations, co-ethnics and co-nationals within the city, or by refugees from earlier waves of migration. But amid these depictions of resourcefulness and supportive social ties, the authors manage to avoid overly romantic characterizations of these strategies, instead demonstrating the complexities produced by their ambiguous and precarious position vis-à-vis domestic and international policy, and due to often antagonistic or competitive relations between refugees and other marginalized or impoverished urban groups. These authors also effectively highlight the ambiguous time horizons in which these strategies unfold, as refugees are often forced to make permanent lives in spaces and under conditions designed to be temporary. Each of these issues are rooted in the histories, institutions, and social demographics of their specific contexts, but they also cut across geographies, as certain aspects of the urban refugee experience are becoming increasingly familiar.

Beyond these five new essays, we are also including several previously published IJURR articles in the discussion. Among these published pieces is this article by Micheline Massabni, first published in IJURR’s inaugural issue in October 1977, which describes the political consciousness emerging in Beirut’s northeastern neighborhood of La Quarantaine (Karantina) on account of interactions and exchanges between Palestinian refugees and other socially and economically marginalized groups. (Although the piece was published in French, the abstract is available in English.) Since IJURR’s earliest contribution to the topic of urban refugees, the journal has continued to publish pieces on such topics as social relations and physical infrastructures in refugee camps, social integration of migrants and citizens, “temporary permanence” and other “discordant temporalities” of asylum, and sovereignty amid contestations over the border. We invite you to re-read these pieces, as each provides insights that are surprisingly relevant to contemporary discussions of the current refugee “crisis.” We invite your feedback and look forward to sustained discussion on these important issues.

All essays on The Urban Refugee ‘Crisis’: Reflections on Cities, Citizenship, and the Displaced


Assembling and Spilling-Over: Towards an ‘Ethnography of Cement’ in a Palestinian Refugee Camp
Nasser Abourahme

ALL ESSAYS ON The Urban Refugee ‘Crisis’: Reflections on Cities, Citizenship, and the Displaced