“We only have to manage our society, not police”, wrote a resident of a gated middle class residential neighbourhood in Whitefield, Bangalore, on a WhatsApp group made by and for the residents of the gated community. I stayed in this residential complex from March to July in 2020 with my family. The complex has hundreds of apartments within an integrated township situated in the Information Technology-corporate hub of the city. The monthly rent for an average apartment varies from 30,000-35,000 Rupees (€350-400) and the residents are mostly early and mid-career professionals. This residents’ WhatsApp group has become more active ever since lockdown in Indian cities in response to the COVID-19 pandemic, as Residents Welfare Associations are liaising with the local government to ensure that residents adhere to the pandemic norms laid out by the state. 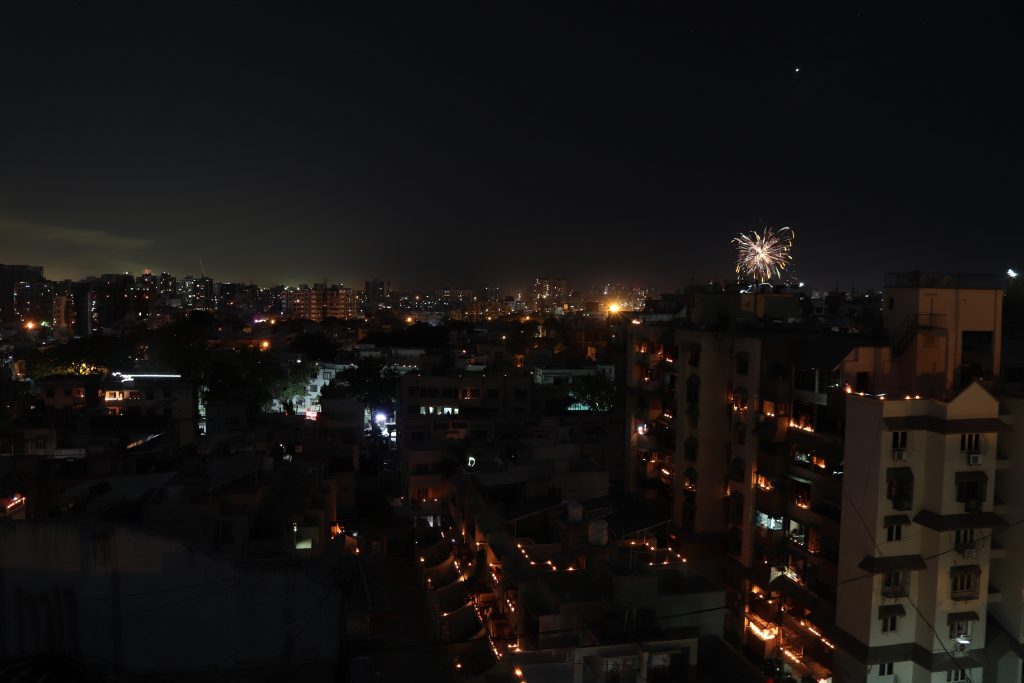 Diyas are lit on balconies and lights switched off to show gratitude to frontline care workers. Photo: Rushil Pachchigar/Pexels

The above comment was made in response to a heated discussion on the WhatsApp group about young girls taking selfies in the park without their masks on. One resident, a man, saw this, took a photo of them and shared it in the WhatsApp group to let others know. This kind of self-styled moral vigilantism is not uncommon and is even more heightened during the lockdown regime in the name of neighbourhood protection measures. Photos of residents not wearing masks, or not social distancing while walking, jogging etc. are taken from other residents’ balconies, and are immediately posted on WhatsApp to shame the “defaulters”. However, this particular incident drew some debate as someone brought up questions about women’s safety and privacy and threatened the photographer, asserting that taking photos and circulating them on social media called for police intervention. A few other residents jumped to the photographer’s rescue and one said that not police, but the residents themselves should be responsible for “managing the society”.

In this essay, I examine the exclusionary politics of popular opinion as it manifests in the context of the COVID-19 crisis and show how the residents, as “civil society”, help forge a popular consensus that incites hostility, fear, and vigilante control in middle-class urban neighbourhoods, undermining the inclusive ideals of associational lives. It is pertinent to remember here the scholarship on the New Middle Class in Indian cities. The middle class’s thin commitment to democratic politics resonates with the current government’s militaristic and heavy-handed lockdown measures, combined with populist war-loving analogies such as “fighting and defeating the virus”, as Mukta Naik points out. Naik quotes High Court judges from Gujarat whose response to a case fought against the Government of Gujarat’s role in the COVID-19 crisis was: “In times of crisis, we need to bind, not bicker. The COVID-19 crisis is a humanitarian crisis, not a political crisis. Hence, it is imperative that no one politicise this issue.” While this quote echoes the middle-class proclivity towards authoritarian tendencies, it also explains why the middle class overwhelmingly applauded BJP prime minister Narendra Modi’s emotive addresses to the nation in crisis.

However, the rhetoric of the “need” for depoliticization pushed by the middle class, or the academic scholarship critiquing middle-class subjecthood for its association with depoliticization, are not fully helpful in studying the everyday politics in my urban middle-class neighbourhood. Associational norms renewed in times of pandemic offer a relentless everyday push to create a hegemonic political discourse in this neighbourhood space, demonizing the plurality of opinion and dissent. The role of the middle class during the pandemic is in fact conspicuously political, as it shapes and normalizes the codes of compliance in urban neighbourhoods in tandem with Modi’s use of the pandemic to strengthen his cult-like image and his political support base.

This middle-class politics was specifically evident in my housing complex after the prime minister’s speech on March 19th, when Modi addressed the nation and gave the Indian citizens a “task”, an emotive national duty. He asked the people to stand at their doors and windows and clap, ring bells and salute for five minutes to show their gratitude to the medical frontline workers working tirelessly. The appeal to perform this task soon turned into a social compulsion mediated by a middle-class moral code to play good citizen in difficult times – rather than indulging in questions about what concrete measures the government had taken to deal with the frontline workers’ safety and security. A section of the intelligentsia and progressive press raised concerns about the brunt of the risks being born by the working class and castes such as cleaners, sanitation workers and blue collar healthcare workers. Question began to be raised about the structural failure and increasing privatization of health, and about why medical and essential service workers are overworked and underpaid in the first place.

However, these questions did not seem to matter much to the residents I was living with. Right after Modi’s speech, there was a spirited preparation for the March 22nd event, which was on a Sunday. Residents came to their balconies with steel plates, containers and spoons, as well as conch shells and whistles, and started banging the plates loudly at 5pm. Standing at the balcony to observe this spectacle, which resembled a loud Hindu festival of asserting one’s presence in the urban soundscape with conch shells and bells (the ghanti used for Hindu religious rituals), my family became uncomfortable. Not joining in the ritual ourselves, we were subjected to gazes from other balconies. I had heard many similar stories from friends, colleagues and family in other Indian cities who had experienced similar looks and later harsh criticism on their neighbourhood’s WhatsApp groups about their lack of compliance with the prime minister’s task. The tension increased on April 5th, another Sunday, when in his address to the nation, the prime minister gave another task of lighting diyas (lights) on the balcony and switching off the lights in the house for half an hour.

This task not only generated social media messages that promoted misinformation, Hindu mythology, and the cult-worshipping of Modi for his “vision” to turn a crisis into a nation-building exercise. It also incited another round of spectacle and the identification of non-compliant neighbours, tagging them as anti-Modi or anti-BJP, and almost anti-national, for failing to join in the neighbourhood’s majoritarian sentiments. Many Resident Welfare Associations and neighbourhood WhatsApp groups announced that they would take photos and videos to document how aesthetically pleasing the neighbourhoods looked in the dark with the diyas on, almost like a Diwali celebration. Residents not willing to perform the “lights out diya on” task felt doubly anxious this time, in the fear of their houses being recorded, and some of them decided to “go with the majority”.

Again, a section of the media critiqued this task for failing to acknowledge the crisis of migrant workers, the crisis of inadequate healthcare facilities, and the deep casteist, classist and racial prejudices coming to the surface. However, this seemed to have little impact on everyday middle-class life. For example, early on during the lockdown period, our building’s WhatsApp group started a discourse against the entry of essential workers, in the fear of them spreading the virus, although middle and upper class air-travellers were its main carriers.

As these examples illustrate, our Bangalore housing complex shows a complex interplay of caste, class and gender to reinforce hegemonic forms of social vigilantism during the pandemic. How might we conceptualize such exclusionary politics in relation to the role of civil society? I build my understanding of the ritualistic construction of “compliant” and “non-compliant neighbours” amidst the pandemic crisis by drawing upon Mona G. Mehta’s work. Her detailed study of Gujarat urban civil society highlights the invocation of a “corrosive consensus” during the Narmada movement, which simplistically divided citizens’ socio-political subjectivities into “pro-state and anti-state” groups. I use my neighbourhood as a case study to understand how fear informs an analogous division between “compliant” and “non-compliant” residents. While examples of extreme violence, where houses were physically attacked for not switching off their lights, may be plenty, the underlying anxiety and fear experienced by the “non-compliant” residents in our neighbourhood were amplified by the “compliant” majority’s aggressive chanting of “Hail Mother India” during the balcony rituals of “lights out, diya on”. Rather than depoliticization, the urban middle classes are exercising new forms of political subjecthood, facilitating the deepening of the Indian state’s hegemonic Hindu nationalist project.