Home   Spotlight On   Language and the City   The City and its Languages: Taking Linguistic Diversity Seriously

It is hardly possible to overestimate the importance of language in urban studies and the social sciences more broadly, after decades of research influenced by so-called French theory and the associated cultural and linguistic turns. However, most attention with regard to language has been devoted to the power of naming, labelling, framing and othering in social relations, and more specifically in urban planning processes. Less attention has gone to languages as such; the impact of the co-presence of multiple languages in cities, (individual and collective) multilingualism, the dynamics between language groups and the representation of urban multilingualism largely remain a blind spot in urban studies.

IJURR can serve as illustration. Few articles are devoted to linguistic issues, and those that do have this focus tend to question semantics. In a 2009 article, Nathalie Boucher and five other urbanists engaged in a conversation about “the strange language of urbanization” linking cities across the “Global South”. More specifically, in a 2007 article Alan Gilbert interrogated the return of the word “slum” in UN Habitat policies (he focuses in particular on the 1999 Cities without Slums initiative) highlighting the risk of foolish interventions the word would justify. Likewise, in a 2007 article Vinit Mukhija and Paavo Monkkonen criticize the use of the non-English term colonia in the United States. Literally, colonia means colony in Spanish, but it is also a word used for neighbourhood in Mexico, with Mexico City’s Colonia Roma rendered famous by Alfonso Cuarón’s widely acclaimed movie Roma (2018). The authors criticize the use of colonia to indicate unregulated, substandard settlements in California, Texas, New Mexico and Arizona. The long but sometimes disputed co-existence of Spanish and Englsih in the region is the backdrop of the stereotyping associated with the term, including the expectation that colonias are border slums, located at the border and demographically homogenous, consisting of Latin American immigrants. In their 2007 piece Mukhija and Monkkonen (2007: 484) argue that the use of the term contributes to “the reconstruction of marginality and distinctiveness of colonias”, but while their study stresses the importance of a name, it does not really analyze bilingual dynamics.

The presence of different languages and the way linguistic diversity shapes urban realities has largely been neglected in urban studies – either ignored or taken for granted. Asking “Why do graffiti writers write on murals?” in a 2016 IJURR debate section, Stefano Bloch shows how the official 1984 Olympic freeway murals in Los Angeles that graffiti writers destroyed were a “sanitized form” of the critical Chicano/a murals that had articulated resistance against displacement by massive freeway construction between the 1930s and the 1980s. Nevertheless, his account of how graffiti writers retook the walls through top-down and bottom-up drawing and writing focuses on tags, while the language divide between the (local) state (English) and the Chicano communities (Spanish) is taken for granted and remains in the background.

Similarly, in a 2014 IJURR article Duncan Light and Craig Young discuss toponymy in light of the commodification and commercialization of public place-naming systems. More specifically, they explore the economic dimensions of urban place names, including both the privatization of names (naming sports stadia and corporate branding through street names) and the commercialization of urban place names for mobility (city maps, GIS, navigation systems). However, the potential tension regarding the languages favoured in this naming market are not addressed explicitly.

An exception is an older IJURR article from 2003 by Julie-Anne Boudreau in which she questions the use of “local democracy” as a discursive strategy for political mobilization in Los Angeles, Montreal and Toronto. Although her analysis is focused on “local democracy” discourses, she addresses linguistic issues by foregrounding the cultural specificities of Montreal as the site of competition between two major linguistic groups: socially well-off Anglo-Montrealers had to adjust to the provincial linguistic regulation aimed at defending French in Quebec and reinventing Montreal as a francophone city, but try to maintain local autonomy in anglophone municipalities against administrative merger. The presence of other ethnic groups is only mentioned tangentially, as is the linguistic diversity of Toronto and Los Angeles. This stands in sharp contrast with the extreme diverse linguistic make-up of both cities (and of Montreal as well!), which is the outcome of ongoing processes of international migration and globalization, bringing a plurality of migrants’ languages (of course rural-urban migration has always brought a wide array of language varieties to the cities). In addition, in many cities across the world English as language of global communication adds to the mix.

Languages in the city

There are many ways in which urban multilingualism could be addressed in urban studies (and urban geography in particular), and bridges built with sociolinguistics, an academic discipline which has long acknowledged the multilingual city as an important object of study (see Garciá & Fishman 2002 on New York). 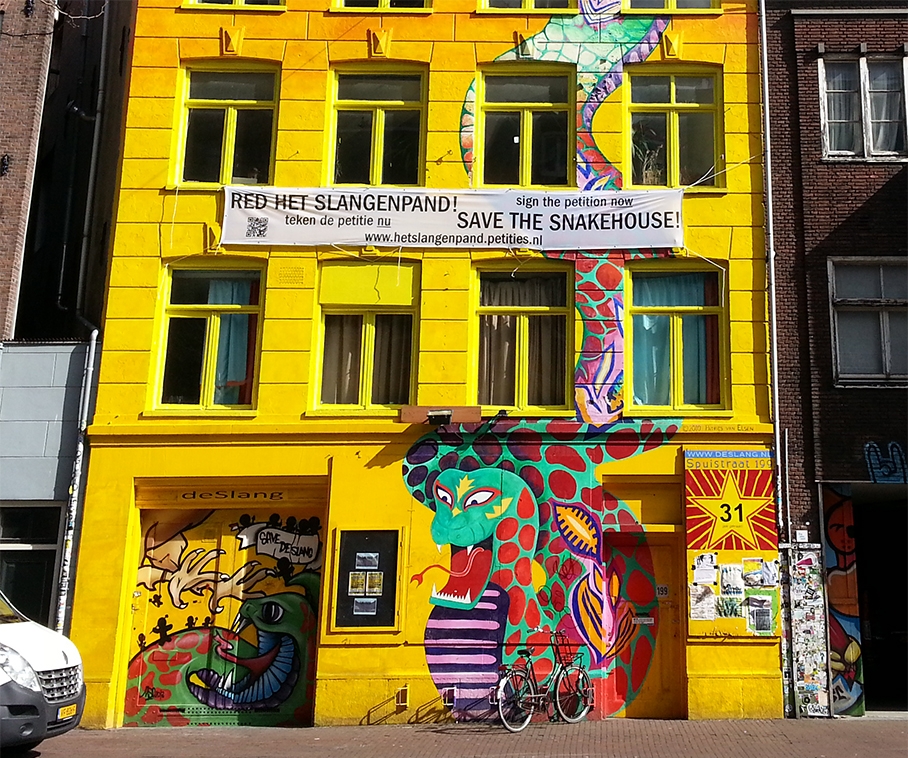 Slangenpand (‘Snakehouse’) was a central Amsterdam squat from 1983 until its eviction and demolition in 2015. This picture, taken in March 2014, shows a bilingual banner urging both locals and visitors to sign a petition to rescue the squat and its characteristic mural.

Languages in the city can be mapped. Over years ago Colin Williams and Izak Van der Merwe (1996) proposed a research agenda for urban geolinguistics. Their call to map language distribution and interaction in multilingual cities, which had high expectations of Geographic Information Systems technology, has found limited resonance. The paucity of relevant and reliable statistics might partially explain this. Census questions about languages, if any, often presume a simple and straightforward relation between an individual and their mother tongue, obscuring the complexity and the dynamism of individual linguistic resources and multilingual practices. Census data are sometimes used to map the uneven urban geographies of ethnic groups, defined by first or main language. Powerful visualizations of the multilingual city include Oliver O’Brien’s interactive map of the London underground based on the prevalent non-English language the residents living near each metro station. More qualitative approaches of urban change have great potential, as a study of Brussels linking language and gentrification suggests (Vandenbroucke 2018).

In contrast to the silence in urban studies and human geography, studies in sociolinguistics have scrutinized multilingual encounters in the city (“metrolingualism” as coined by Pennycook and Osuji 2015), but also in specific sites such as schools, health institutions and work places. Assessments of the local situations and policies in European cities demonstrate that linguistic diversity is not specific to global cities such as London and New York, but also concerns medium-sized and smaller cities (see Boix-Fuster 2015; King and Carson 2016; Grin 2018).

A dominant theme within this type of sociolinguistics is linguistic landscapes (Landry & Bourhis 1997 for a seminal article): the languages of street signs. The linguistic landscape includes signs that are formal (such as street names) and informal, state-made and commercial, top-down and bottom-up (including graffiti). For sociolinguists, linguistic landscapes are fascinating indicators of the vitality of the languages that are present; the interaction between them (the occurrence or the absence of multilingual signs); and more recently the impact of immigration. For urban scholars, such an approach could help uncover power relations between language groups in the city (e.g. Vandenbroucke 2015 on Brussels; Kraus 2011 on Helsinki and Barcelona; Leimgruber 2017 – all cases that reflect the increasing prominence of migrants’ languages and the impact of English on longstanding tensions between local languages: French and Dutch, Finnish and Swedish Spanish and Catalan, and French and English, respectively). In addition, the transient linguistic landscapes in urban spaces such as the use of multiple languages on banners and signs in demonstrations can shed light on embodied engagement with political processes at larger scales when messages are addressed to politicians and a public beyond the national language community (Mamadouh 2018).

Likewise, critical urban toponymy can inform our analysis of such dynamics, as many disputes about street names and place names include a linguistic dimension, in addition to an ideological one (see Rose-Redwood et al. 2018). Moreover, urban linguistic soundscapes could be productively scrutinized to study those dynamics of inclusion and exclusion (Peake 2002; El Ayadi 2019). Finally, the linguistic dimension of online representations should alert us to the relevance of multilingualism in augmented reality (Graham and Zook 2013).

Last but not least, urban multilingualism offers a new key to analyze city-state relations and more specifically issues related to citizenship, sense of place and sense of belonging. Cities are linguistic crossroads. In the context of modern territorial nation-states, nationalization – including linguistic standardization and harmonization – has affected cities as it has contributed to the conceptualization of (individual and collective) multilingualism as a problem, as deviating from the alleged monolingual norm (one state, one territory, one nation, one language). The increased multilingual diversity in early 21st-century cities has revived the tensions between representations of cities as multilingual places and of states as monolingual territories, between city and state logics.

Attitudes towards linguistic diversity in cities, and towards new linguistic varieties emerging from these linguistic contacts, could inform our understanding of multilingual cities and urban social change in general. Recent examples include stereotypes associated with foreign accents (e.g. Nortier and Dolsteijn 2008 for Moroccan Dutch); attitudes towards Multicultural London English (MLE) as the new local variety of English (more common than Cockney English) and the stereotypes associated with its use (Kircher and Fox 2019); hostility towards immigrants’ languages and alleged unwillingness to learn English as backlash to the super-diversity of British cities (Musolff 2018); migrants’ socialization in bilingual settings such as Montreal (Paquet and Levasseur 2019); and elite multilingualism (special issue’s introduction by Barakos and Selleck 2019). May the multilingual readership and authorship of IJURR answer this modest call for more thorough contributions grounded in urban studies, to deepen our understanding of multilingual cities and of the role of languages in urban social change.

Virginie Mamadouh is Associate Professor of Political and Cultural Geography at the Department of Geography and the Centre for Urban Studies (CUS) of the University of Amsterdam in the Netherlands. With Nesrin El Ayadi, she has conducted research on urban multilingualism, within the multidisciplinary European program Mobility and Inclusion in Multilingual Europe (2014-2018). More information at mime-project.org. Email: v.d.mamadouh@uva.nl

Graham, M., and M. Zook. 2013. Augmented realities and uneven geographies: Exploring the geolinguistic contours of the web. Environment and Planning A 45(1): 77-99.

Nortier, J., and M. Dorleijn. 2008. A Moroccan accent in Dutch: a sociocultural style restricted to the Moroccan community? International Journal of Bilingualism 12(1): 125-142.

Pennycook, A., and E. Otsuji. 2015. Metrolingualism: Language in the City. London: Routledge.

Vandenbroucke, M. 2018. Multilingualism, urban change and gentrification in the landscape of a Brussels neighbourhood. Multilingua 37(1): 25-52.

Open-access IJURR articles on Language and the City