On June 28, 1969, police raided the Stonewall Inn in Greenwich Village, New York. It was not the first time that this bar with an LGBT clientele was so targeted, but in those early morning hours a spontaneous shout of “Gay power!” sparked resistance to arrest, a riot ensued, and history was made. 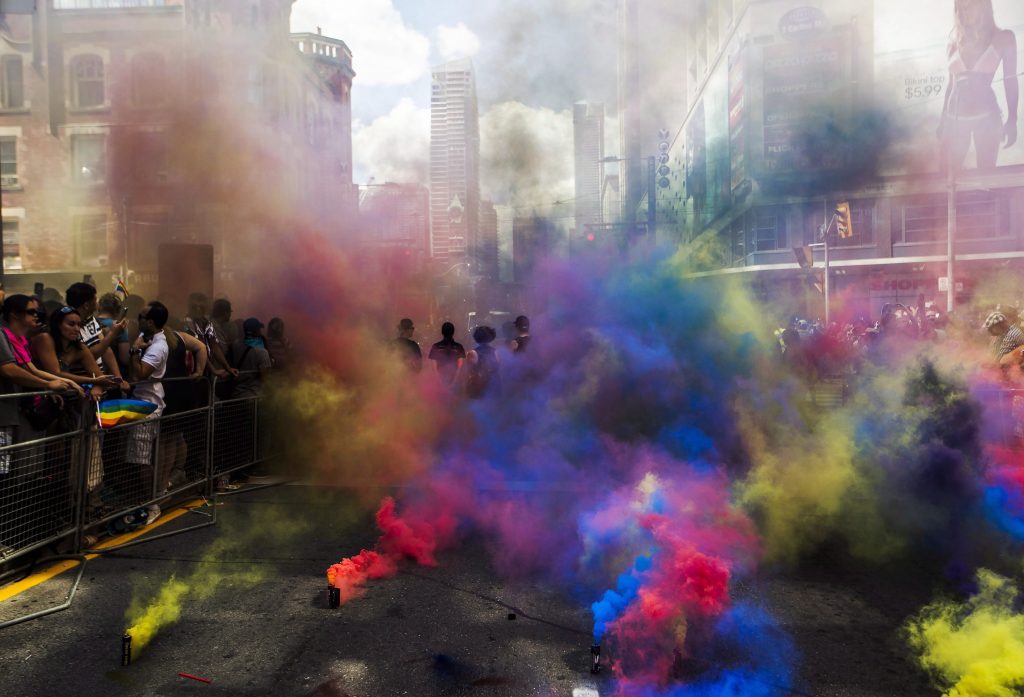 Members of the Black Lives Matter movement stand amidst coloured clouds from smoke grenades at the annual Pride Parade, in Toronto on Sunday, July 3, 2016. The Canadian Press/Mark Blinch.

Today, the Stonewall uprising has a complicated legacy. On one hand, it has morphed into a symbol of the whitewashed liberalism of the contemporary US LGBT movement. Consider, for instance, the 2015 film Stonewall (director: Roland Emmerich). As Roderick Ferguson (2019: 1) states: “[Stonewall] purports to tell the story of that eventful day…with a not so agreeable twist. Rather than basing the story on the racially and ethnically diverse group of queens who started the uprising, the film makes a young cisgender white man named Danny the origin and center of that fateful day”. Further, as Emily K. Hobson notes, “Sarcasm over who ‘threw the first brick at Stonewall’ has circulated as an internet meme since 2015. The joke mocks a rainbow capitalism that appropriates narratives of resistance by queer and trans people of color; thus Taylor Swift, Carly Rae Jepsen, and an ad for Herbal Essences shampoo have all been nominated as throwing the first brick.”

On the other hand, Stonewall remains a rightful symbol of radical queer politics. As Julio Capó Jr. puts it powerfully in an essay marking the uprising’s 50th anniversary:

Stonewall … means dismantling police brutality, anti-Blackness, transphobia and the patriarchy, militarized borders, family separation, as well as nationalism and xenophobia. It means the abolition of ICE as well as camps and detention centers holding migrants and asylum seekers in the false name of national security. It means closing down prisons that capitalize on the Jim Crow-like segregation of Black and Brown bodies. Indeed, Stonewall means ending the state’s torture and murder of Black people and demanding reparations. It means healthcare for all. It means doing away with the state’s regulation of women’s bodies and the state’s defense of corporate greed that permits profit schemes to make potentially life-saving drugs like Truvada inaccessible to those at highest risk of HIV transmission. It means valuing all families: our chosen families, families separated at the borders, and families of those behind bars left to fend for themselves.

Capó’s essay concludes with, “Until we are all free, Stonewall remains our sanctuary.”

I obviously much prefer the second legacy (as shelter and urgent call) to the first (as co-opted assimilationism). Understanding politics in this way – as the insistence that we can imagine and enact a radically different future – is also where a lot of queer theory dwells these days, as ever. In José Esteban Muñoz’s words, much contemporary queer theory “squint[s], to strain our vision and force us to see otherwise, beyond the limited vista of the here and now” (2009: 22). Because “queerness is not yet here” (1; my emphasis), queer theory looks to “the ‘should be’ of utopia”, to “its indeterminacy and its deployment of hope…against capitalism’s ever expanding and exhausting force field of how things ‘are and will be’” (99).

Queer theory incites and insists, for queer, as Martin Manalansan sets out, “is about messing things up, creating disorder and disruptive commotion within the normative arrangements of bodies, things, spaces and institutions.” It is “about the productive possibilities of people who are left out, displaced, or dispossessed because of their position within the landscapes of the normal” (Manalansan 2015: 567).

The city is one such “landscape of the normal.” It is a capitalist social differentiation machine – as the Stonewall example, and so much else, attests – and thus queer activists and movements work to “mess up” city politics and practices in many parts of the globe (on such work in post-Stonewall New York, see, for example, Andersson 2015; Goh 2018; Hanhardt 2013).

Another key site of normalization is urban studies, and it needs “messing up” too. Despite the importance of the city as a site of queer politics, there is no “queer urban theory.” There is queer theory, there is urban theory, and there is a longstanding body of intellectually and politically important scholarship that connects the two. But there is no “queer urban theory” because queer scholarship is largely ignored by urban theorists. It is rarely acknowledged or engaged, it is off (or at least way out in the remote suburbs of) the urban canonical map, and it has little impact on or influence within urban studies.

“Queer urban theory” is simply not a sanctioned scholarly subfield. I am not suggesting that it ought to be. I do not think formal incorporation within scholarly space, another capitalist social differentiation machine, is a requisite step on the way to the “should be”. But it would certainly be worth squinting with Muñoz and others in order to strain urban visions and see otherwise.

Now, as throughout the history of urban studies, LGBT politics, people, subcultures and movements are not explicitly mentioned all that often within urban studies scholarship. When they are, at least in what we might refer to as “canonical” or “mainstream” urban studies, the mention often consists of nothing more than an effort to pin down or locate queerness within that urban morphological feature “the gay village”. And then that’s that; sexuality and gender identity component of the course complete, with only the barest of coverage despite the existence of huge bodies of literature that have emerged out of LGBT lives and movements to tell us so much more about queer ontologies and epistemologies of the urban and urbanization.

The quote from Capó Jr. above does not just link the queer Stonewall uprising to police brutality, anti-Blackness, transphobia and the patriarchy, militarized borders, family separation, nationalism and xenophobia, and more, merely out of solidarity (though it would be fine and right if it did). It links them because decades of queer scholarship and activism and experiences have shown that heteronormativity is about much more than the homo-hetero distinction alone. It is about colonialism, racism, sexism, imperialism, nationalism, and more. It is all manner of intimate relations, domesticities, proprieties and productive relations. Heteronormativity is about, as Michael Warner states, “reprosexuality … a relation to self that finds its proper temporality and fulfillment in generational transmission” (1991: 9).

There is thus a need, as I argue elsewhere, “to go beyond the notion of ‘queer space’ as ‘LGBT space’ and to read the whole city and all its citizens and subjects as living in a heteronormative time and place” (Oswin, 2019: 105). There is a need to think and act queerly to bring about the city “not yet here”.

Natalie Oswin is at the Department of Human Geography, University of Toronto Scarborough.

Muñoz, José Esteban (2009) Cruising Utopia: The Then and There of Queer Futurity. New York: NYU Press.