LGBT communities have left their imprint on the big cities of the global north. From Pride parades to gay villages with rainbow zebra crossings, to posters on buildings and subways and memorials for historic victims and pioneers, the sign of queer has begun to fill the official archives of the city. Pop culture, too, represents today’s cosmopolitan as equally likely to have a gay sidekick as to eat ethnic food. As many commentators have noted, the designers of the neoliberal city (aka the entrepreneurial city) have seized this opportunity to brand ‘the village’ as one in a range of multiculturally-themed areas. 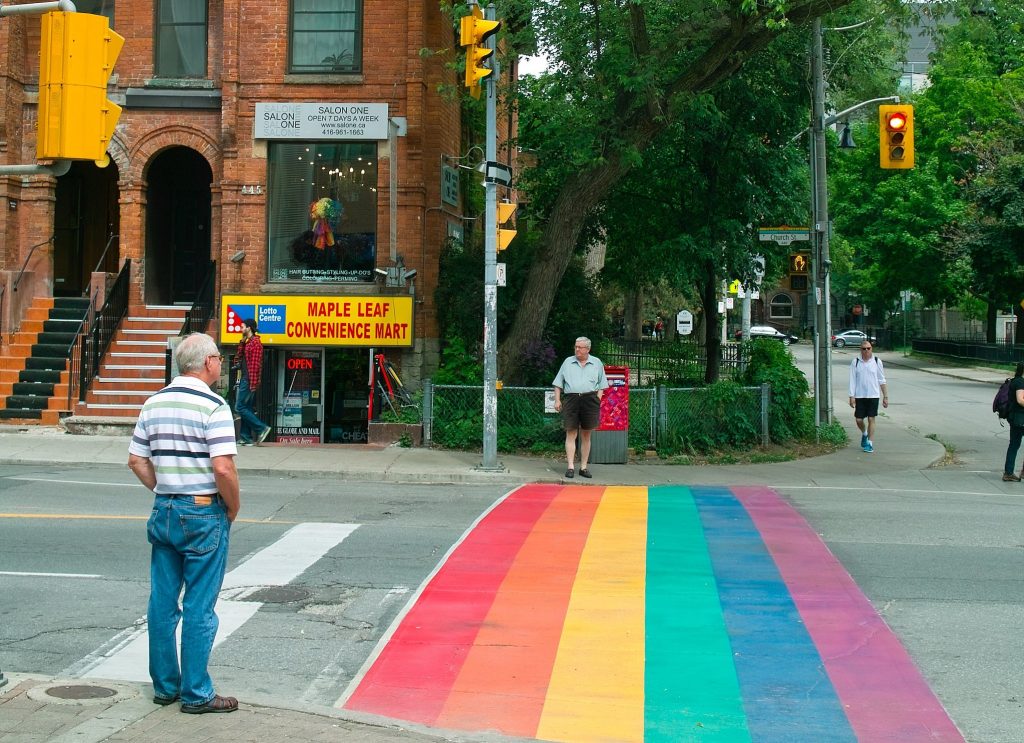 Discussions of assimilation and homonormativity have grappled with the increasing fit of marketable queer subjects into neoliberal spatial moulds of production and consumption. What is less often discussed is how what I call the queer regenerations of formerly degenerate subjects and urban areas are embedded in wider spatial, social, economic and political transformations, as stated in the invitation to contribute to this issue. Drawing on Robinson and Coulthard, I name these transformations as the not so ‘neo’-liberal continuities of racial capitalism and settler colonialism. The difficulties of naming queer space as part of a longue durée of slavery, colonialism and genocide are compounded by a silence, in part due to a hangover from the anti-essentialism wars of the 1990s-2000s, about queer people of colour as geographic subjects. In contrast, the work that I have been part of in Berlin and Toronto describes queer Black, Indigenous and people of colour as producers of maps and memories that usefully inform us on our quest for urban justice, by helping us assess where we’re coming from, where we are, where we’d like to go, and whom we’d like to take with us. 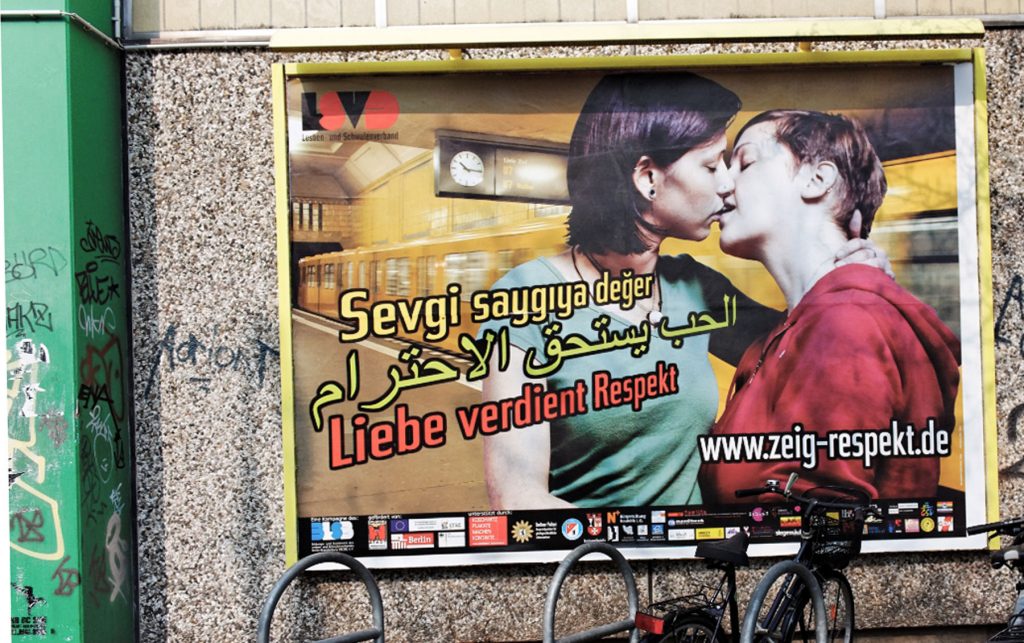 Berlin and Toronto are two cities that illustrate the marvellous potential of these maps. In Berlin, white gay, queer and trans subjects are at the forefront of gentrification and racial profiling. Progressive parties’ action plans against homophobia, anti-hate crime activism by the big LGBT organizations, sympathetic media reports, and kiss-ins, demos, and posters stating that ‘Love deserves respect!’ all target neighbourhoods that are gentrifying, and that have long been associated with racialized populations that are othered as ‘migrant,’ ‘Muslim,’ ‘Turkish’ or ‘Arabic’. In these grassroots and state-led attempts at transforming the city, homophobia and transphobia join an older list of violence, crime, impulsiveness, patriarchy and educational underachievement as signs of racialized deficits. This archive is a colonial one, which serves to distinguish noble from affectable subjects, or those who are valued for their work to improve the body and the self from those who apparently lack control over their deficient impulses qua their nature or their culture. The queer of colour subject – especially where unwilling to perform exceptionality to this rule – emerges as the constitutive outside to the gay lover in this context. Hir refusal to be lovely was illustrated by the Khalass! We’re vex manifesto, spread on flyers by anonymous queers of colour at the alternative Pride parade in 2013 in response to the white queer movement’s imperialist discourses on urban space:

Do not enter our communities to destroy them… Our spaces get converted into your garbage dumps and become your fantasies of unmanned land with cheap rents. You consider yourself and your bourgeois squats to be “pioneers” and you don’t even realize how colonial your language is, you do not see the civilizing mission you are part of and that you prepare the ground for other white settlers to come. 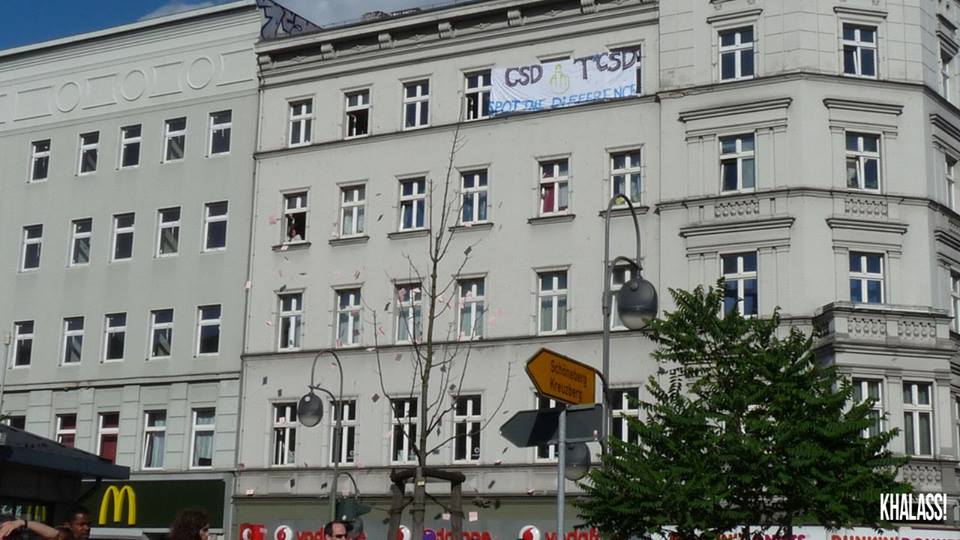 The resonances between settler colonialism and gentrification are amplified in Toronto, the city I am currently researching as part of Marvellous Grounds, a collective of queer of colour activist scholars and community members. There, the script of the racialized homophobe was momentarily reversed in 2018. Our two anthologies of queer and trans Black, Indigenous and people of colour (QTBIPOC) art and writings in Toronto had just gone into print, when news broke of a ‘village serial killer’ who for years had raped and killed other men. Bruce McArthur, the white man convicted of killing eight, mostly South Asian and West Asian men, had been a well-known village regular. Early reports followed an older script of perverse sexualities and degenerate spaces, by highlighting that victims and perpetrator had both frequented the village and used similar dating apps. As I show in my forthcoming article, however, the story that circulated at the biggest volume and speed worked to queerly regenerate the gay village as a symbol and microcosm of the LGBT-friendly nation. Journalists’ preferred interlocutors were white gay business owners who were shocked that their neighbourhood (and their businesses) could be tainted by such atrocities, and at the hands of someone whom they had considered a patron and friend. The map of an innocent, trusting neighbourhood that emerged from this story remained empty of queer people of colour. Indeed, while McArthur was well known and liked in the village as a patron and entrepreneur, several of his victims had not even been reported missing.

Our counter-archive of QTBIPOC maps and memories complicates this terrain of white innocence. Contributors show how the village, far from a safe haven, is a site of displacement for sex workers, trans women of colour, youth, street-involved people and others who are unable or unwilling to spend money in order to belong. Their unassimilability into the area’s capitalist design renders many QTBIPOC vulnerable to the interpersonal and institutional violence and premature death that regularly accompany gentrification and policing. In contrast, the assembled essays, interviews, roundtables and artworks contest a colonial narrative of successful territorialization and securitization whose racial-capitalist blueprint is premised on the disappearance of Black, Indigenous and racialized bodies.

While different, the stories of queer lovers and hateful Others in Berlin, and of the Toronto village serial killer, share key ingredients, from the mutability of global capital under finance capitalism to the waxing and waning of a neoliberal multiculturalism whose need for transitional objects to diversify cruelty and greed is arguably shrinking in the era variously periodized as Trump, Ford, Brexit or the AfD. QTBIPOC communities, while imperfect, fully human and thus never innocent, are well-honed in dreaming up ways beyond this mess amidst dwindling resources and shrinking spaces. They innovate revolutionary methodologies that can fertilize whole movements’ desires and capacities to redistribute wealth in a way that does not harm the planet and all who share it. They provide compasses we’ll need to prefigure futures where everyone has a right to the city. To pleasure, even. To marvellous grounds.

Jin Haritaworn is an Associate Professor at the University of York.


All essays on Queering Urban Studies