Home   Spotlight On   Queering Urban Studies   Into and Beyond Death: Considering Transgender Justice in Urban Studies

What these cities share in common is not location, climate, size, density, or population demographics. Instead, their links here rest in their addition over the past year to the places in which violent murders of trans, non-binary, and gender non-conforming people have occurred – notably, Black transgender women. These cities comprise over half of the locations where this year’s reported murders have occurred, as of late November. Most certainly there will be others before the end of the year, and there are those whose deaths have gone unreported. Of the 290 trans people who have been accounted for as murdered worldwide, 28 of those deaths occurred in the United States, and 23 of those people were Black transgender women.

Cities are mythologized as bastions of acceptance for the lesbian, gay, bisexual, transgender, queer, and Two-Spirit (LGBTQ2) community, as beacons where open-minded people and political values collect, allowing LGBTQ2 people to flee from the intolerable places they formerly inhabited. This logic can be associated with a North American and, more broadly, ‘western’ historical account of queer people concentrating in urban underground spaces and cultural scenes, which have morphed over time into our current understandings of gay villages and other marked queer urban spaces (Brown 2000; Oswin 2006; Podmore 2015). In these contexts, queer urban placemaking has grown out of a need to connect anonymously and secretively – an element of queer existence that remains necessary for many – and later formed into more overt and politicized practices of visible queerness. Such practices of visibility align with privileges of safety, increased protection, and validation, elements of living that many people of colour, migrants, feminine, Indigenous, low-income, trans, non-binary, and gender non-conforming people are minimally afforded.

While cities have and continue to play important roles in the lives of LGBTQ2 people, the emphasis and concentration on urban space in queer scholarly theorizing has been critiqued as metrocentric (Bell 2000; Halberstam 2005; Knopp and Brown 2003), pitting ‘progressive’ cities against rural and suburban landscapes as politically backwards and culturally oppressive. Yet an additional critique that remains to be raised is that this framework detracts attention from the lethal transphobic conditions of living peppered throughout cities, and within queer spaces themselves. Indeed, the pinkwashing of cities as celebratory environments of LGBTQ2 people too frequently erases the vulnerabilities faced by trans people – largely youth and women of colour – that comprise daily living in cities, ranging from un(der)employment, to homelessness, to violence and early death (Dwyer 2011; Reisner et al. 2015; Spade 2011). While cities are often theorized as enhancing and thriving on difference, they by no means equate sanctuary and safety for trans, non-binary, and gender non-conforming people. Attention in urban studies must focus on the ways in which cities both celebrate LGBTQ2 living, and function as sites in which the lives of predominantly Black trans women are ended.

However, in the face of increasing violence we are also witnessing a growth of visible collective action in cities that calls attention to transphobic violence and discrimination. Consider a protest from this past October in Toronto: Vickery Bowles, an employee of the Toronto Public Library (TPL), hosted a public talk by Meghan Murphy, a well-known trans exclusionary radical feminist (TERF). Despite actions, dialogues, and requests over multiple weeks for TPL to cancel this event – by various Toronto organizations, TPL employees, and public personas including the city’s mayor John Tory – the event was still allowed to occur. 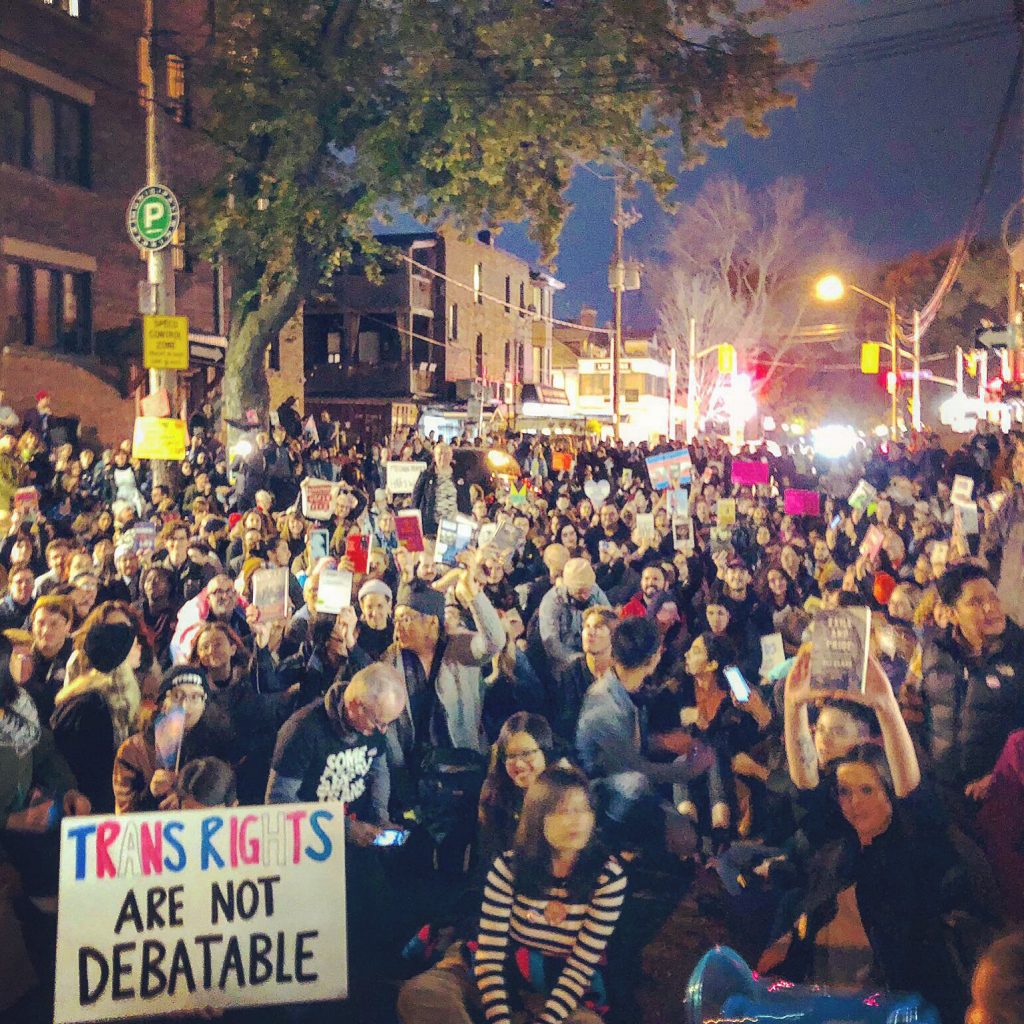 On the night of Murphy’s talk, over one thousand trans, non-binary, gender non-conforming, and cisgender people surrounded the library where the event was taking place, donned with placards and chants in support of the trans community. Earlier in the evening, Fay & Fluffy’s Storytime, a popular drag queen event held for children in city libraries, announced an end to their partnership with the TPL. The following day, City Councillor Kristyn Wong-Tam proposed a vote within City Council to review Toronto’s policies dictating how its community spaces, like the TPL, are used, in consultation with LGBTQ2 community members. The vote passed 20-1, initiating an investigation into anti-LGBTQ2 discrimination within city institutions that will take place over the next year.

In all of these ways, we are witnessing actions and organizing by trans, non-binary, and gender non-conforming people that not only call attention to the normalized violences that occur in our everyday urban geographies, but also initiate and affect urban change. Acts like the TPL protests, alongside the realities that cut short the lives of predominantly Black trans women, signal the uniqueness of trans urban geographies. Such gendered meanings of cities must be taken seriously in an urban studies that aims to grasp LGBTQ2 lives, politics, community formations, contestations, and cultures in their entirety. This necessitates an interrogation of the (homo)normativities anchored in (queer) urban infrastructures, such as public and social services, municipal bodies, and non-profit organizations, and the ways in which queer ‘acceptance’ masks both the everyday brutality and forms of living that comprise the realities of trans, non-binary, and gender non-conforming people who make meaning of, and impact, the city.

Rae Rosenberg is a queer, urban, and cultural geographer whose research interests include the placemaking and survival strategies of marginalized LGBTQ2+ people. He is currently a lecturer for York University, and his work has been published in Gender, Place, and Culture, Urban Geography, and Somatechnics.

Brown, M. P. (2000) Closet Space: Geographies of Metaphor from the Body to the Globe, London: Routledge.

For the city ‘not yet here’
Natalie Oswin

For the city ‘not yet here’
Natalie Oswin