In June 2019, a fairly unusual event took place at a largely nondescript New York government building in Lower Manhattan. Legislators, activists, and organizers gathered to announce a bill to decriminalize sex work in the state. Said activist Cecilia Gentili, “We are trying to change the lives of many New Yorkers who historically have been criminalized for using their bodies to survive.” Community organizer Audacia Ray expressed hope that the bill would help end the violence against people in and around sex work. Assembly Member Richard Gottfried linked decriminalization to a long lineage of dismantling social and legal restrictions on consensual actions. 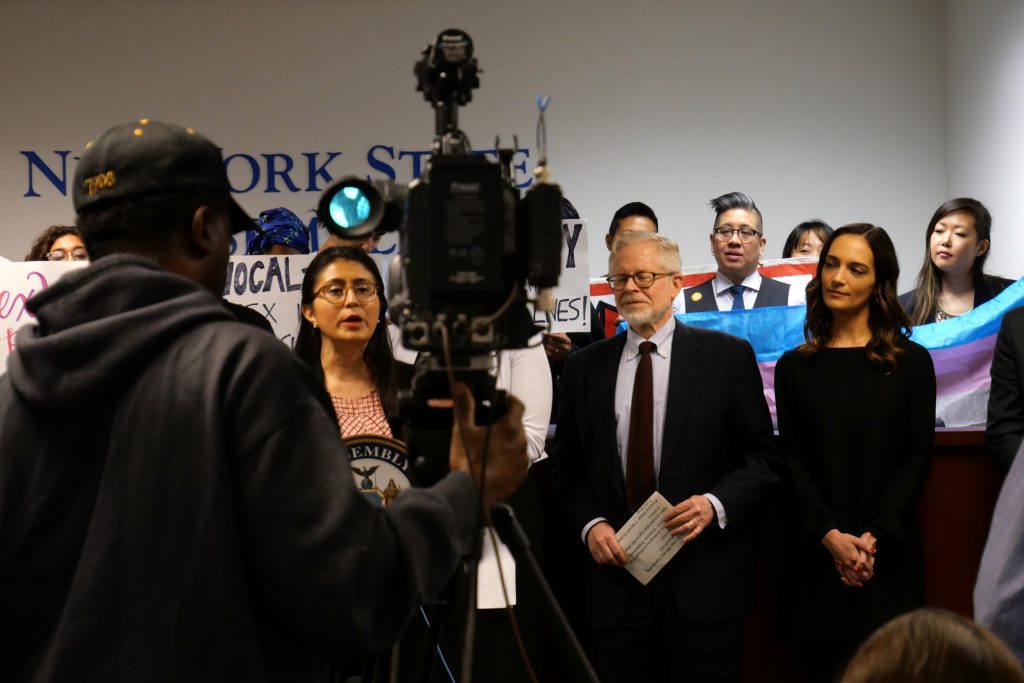 The embracement of queer theory by urban researchers has expanded ideas about urban space, destabilizing heteronormative concepts of urban sociospatial relationships and the accepted material terms of urban space (see Heynen 2017). Now, ongoing conflicts and emerging activism around sexuality and work promise to reset further the bounds of queerness in/and the city, broaching new questions of identity, the political economy of space, and the regulation of the urban built environment.

The movement for sex work decriminalization in New York, led under the banner of Decrim NY, involves a coalition of sex work activists and organizers from organizations such as the Anti-Violence Project and Red Canary Song; service providers such as Womankind; lawyers inside and outside mainstream institutions of criminal justice, including Tiffany Cabán, who ran for and almost won the Queens district attorney post on a platform foregrounding decriminalization; and progressive legislators, such as Jessica Ramos, Julia Salazar, Yuh-Line Niou, and Ron Kim. This organizing movement embodies the broad top down-bottom up, grassroots-legislative coalition building that urban studies and planning researchers look to as examples of progressive, systemic change. How can we develop this productively, theoretically?

Some of the biggest problems facing queer people in cities, now well established in urban studies and the broader social sciences, include homelessness, economic precarity, and unjust and brutal racist, queerphobic policing. These issues disproportionately affect queer, trans, and gender-nonconforming people of color, including sex workers. They involve questions of safe spaces and claims on space in cities by particularly marginalized urban residents, often fighting discriminatory policies and unjust political-economic systems. These are centrally issues of urban studies. And yet the study of sex work and workers in cities continues to play a peripheral role in urban studies (for recent exceptions see Ritterbusch 2016; Hubbard et al. 2017).

Connecting formative histories of LGBTQ liberation (Duberman 1993) to more recent radical queer activisms in the era of liberalized urban development (Goh 2018), a kind of story unfolds in New York City: a story of a queer city once emergent, then emblematic, and now under stress. But the recent organizing around sex work presents new avenues for understanding the realities and potentialities of queer urban space.

The Decrim NY coalition has been mobilizing, in particular, around the death of 38-year-old Yang Song, a migrant massage parlor worker who fell four stories from an apartment building on 40th Road in Flushing, Queens, during a raid by the NYPD in November 2017. The coalition advocates not only to decriminalize and decarcerate the sex trades, but also to repeal loitering laws that are used by police to target transgender people, and to vacate the criminal records of victims of sex and labor trafficking. Besides organizing workers and guiding policymakers, Decrim NY has canvassed city neighborhoods, gathering data about community opinions and opening conversations about sex work, economic hardship, and other systemic concerns.

This is a prickly issue in more mainstream discourse. Sex work and decriminalization remains a pitched debate among feminists, often underscoring lines of race, class, and gender presentation. Among policymakers, questions of sex work tend to be dominated by conversations on policies targeting sex trafficking, such as the SESTA-FOSTA acts of April 2018. But sex workers themselves have asserted that conflating trafficking and sex work, and criminalizing sex work, workers, and their clients, does not keep them safe, and further victimizes them. Kate Zen of Red Canary Song points out, “How can help and rescue be delivered in the form of handcuffs?”

This is not only about the different positionalities of gender and sexualities. It is also about the emerging modes of organizing around queering urban space.

There are two overlapping, complementary lines of recent thought in queerness and urban studies. One calls for a deeper interrogation of the material, historical, gendered, and racial hegemonies of sexualized urban space (Oswin 2008). Another is the notion of queering as continually opening, expanding, and disturbing the bounds of thinking of urban landscapes (Gandy 2012). Inquiring about the urban of sex work brings together these lines around shifting socialities and physical materialities of urban space. A sustained inquiry would examine the operational landscapes of sex work – the real-estate powers behind buildings housing businesses that are perceived to be illicit, such as massage parlors; the ongoing formations of immigrant social and political-economic enclaves; the interspersing of formal and informal work; the (often violent, sometimes deathly, as in Yang Song’s case) encounters with law enforcement; as well as the more diffuse social relationships of networks of friends, allies, and workers doing work that is stigmatized, precarious, and besieged.

An urban political economy of identity

A key aspect of sex work, recognized by the decriminalization movement, is its intersections with workers rights, migrant rights, and prison abolition movements. State senator Jessica Ramos, one of Decrim NY’s main supporters, is the chair of the senate labor committee, recently proposing legislations for fair farmworker labor practices and street vendor rights. Red Canary Song is as much a migrant rights organizing group as it is a sex workers one, constantly holding up the concerns of deportation and detention of community members. And there is steadfast support for the No New Jails NYC campaign. Here, activists fight back against the ways in which differently racialized and bodied workers, and different work, mark one’s labor and personhood in intertwined ways as simultaneously outside of legality and social acceptance. While not explicitly about land and property, these concerns go to the heart of recent ruminations on the constructions of personhood that underlie injustice, oppression, and the banishment of poor people of color from cities (see Roy 2017).

These intersections may, as well, broach openings to think about a new urban political economy of identity. Some ongoing theoretical debates in urban studies, such as those about the generalizability of urban concepts and the salience of positional difference, can often appear to cleave concerns of political economy and embodied identity. But that’s not how we live in cities. In the introductory episode of the radical geography podcast Antipod, each podcaster-geographer declared their position – as [someone] from [somewhere]. Such a declaration, now quite regular in Left spaces, affirms identity as a responsibility. It underscores why and how one’s identity-based privilege might be “checked.” If identity is responsibility, then it is also a material condition, and a part of a broader political economy. The issue of sex work – and especially the ways in which activists, organizers, and legislators are building movement for sex work decriminalization, centering queer and trans people of color, focusing on labor and migrant rights and livelihood struggles – offers the terms of one conceptual framework for how positional, embodied differences are regulated, policed, and dispossessed within the uneven and unjust terrain of urban political economies, and how they might be liberated.

This further raises familiar yet problematic questions for urban studies. As Amy Ritterbusch (2019) has pointedly elucidated, research with and for marginalized, policed communities is fraught with hazards going beyond accountable scholarship. It brings up life conditions and relationships that elude so many well-established methods, concepts, and practices of research. Witness the dearth of embodied, positional urban research by and about sex workers, the bodily and legal dangers and the heightened stigma faced by workers, and the overwhelmingly hostile political climate to migrant, racialized, and trans and gender nonconforming bodies. What are our responsibilities not only to frame and do research, but to ensure that those on the frontlines of struggle and experience are not further harmed, and have increasingly direct investment and involvement in the production of knowledge about their lives?

On November 30, 2019, the movement returned to 40th Road in Queens to hold a vigil for Yang Song on the second anniversary of her death. Taking over a public alley, observers listened to impassioned speeches by coalition members, transnational allies, and legislators. For critical urban studies, charged with unearthing the material and emotional landscapes of everyday urban practices, this seems a good place to start.

Kian Goh is an assistant professor of urban planning at the University of California, Los Angeles. She researches urban ecological design, spatial politics, and social mobilization in the context of climate change and global urbanization.

I thank Aya Tasaki, member of the board of directors of Red Canary Song, and former Decrim NY steering committee member, for inspiration and guidance through nuanced, complex issues.

Ritterbusch, Amy E. 2016. Mobilities at Gunpoint: The Geographies of (Im)Mobility of Transgender Sex Workers in Colombia. Annals of the American Association of Geographers 106(2): 422–433.