Development in another guise?

This essay draws attention to the ambivalent appeal of technology in global south cities like Jakarta, at once linked to liberating “leapfrogging” capacities and to predatory global capital. Technological innovations are credited with the ability to forge new norms, conjure new publics, and materialize global futures (Collier et al. 2016). In Indonesia, technology upgrades are prominently featured in both state-led and private initiatives, lending a futuristic sheen to otherwise familiar infrastructure projects.[1] While state projects appear cumbersome and spectacular in comparison to light and fast startups, we ought to recall that global finance underwrites state projects at the same rate that it props up the private sector. In this piece, I discuss the emergence of a popular technological innovation that has succeeded in conscripting the everyday life of the poor, and indeed the everyday life of the city, into a paired narrative of enhanced citizenship and national development. I am interested in the complementary rather than disruptive connection between technologies of the everyday (the motorcycle and the motorcycle taxi service, the app and the smartphone) and the nation’s infrastructural imaginary, which I nevertheless mark as “conscription” rather than “inclusion.” More than ever, cities in the global south are scaling up, and the “senses of desire, pride, and frustration” (Larkin 2013: 333) engendered in the poor are deeply political responses with few outlets for democratic expression.

In 2010, a small Indonesian startup named Go-Jek began to offer an on-demand service for motorcycle taxi rides in Jakarta, targeting new users such as professionals and expatriates in the Central Business District who were frustrated by the terrible traffic and yet were unaccustomed to the motorcycle transport of the masses. The name was a smart e-commerce take on the ubiquitous “ojek,” combining the localized English word “Go” with the Indonesian word for motorcycle taxis (ojek). Ojek, then and now, are viewed as an indispensable mode of transport in a megacity fast approaching total gridlock (see Lee 2015). One can find in Indonesia, as in other Southeast Asian countries like Vietnam and Thailand, a working poor and middle-class urban population channeled into the robust consumer market for motorcycles in the absence of reliable public transportation. 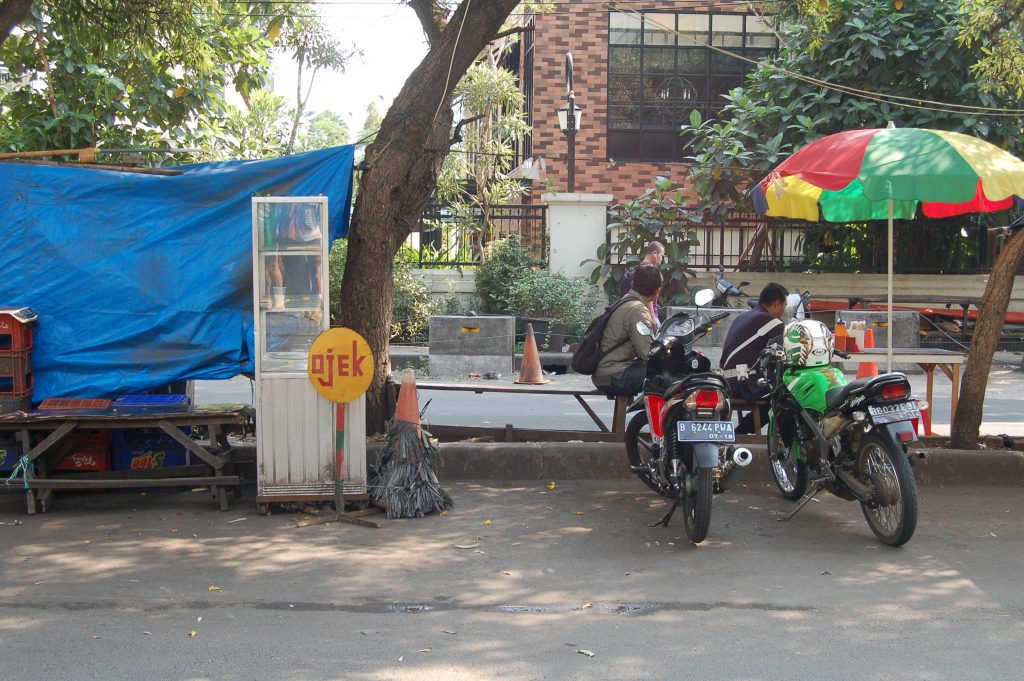 The motorcyclist’s ability to navigate tight spaces, flout all traffic rules about the directional flow of traffic, and enter prohibited lanes and highly congested areas, gives the motorcycle taxi an advantage over larger or more luxurious vehicles. While the practice of offering rides for hire existed as early as the 1970s, as a means of supplementing low wages in the civil service and the workplace, the number of ojek did not reach its present-day scale until the late 1990s. In the aftermath of the Asian Crisis, the unemployed expanded the ranks of motorcycle taxi drivers and turned an informal economy into one of the city’s social institutions. Ojek could be found clustered outside office and apartment blocks, waiting for customers in simple shelters that displayed signs with the word “Ojek”, “Ojeg” or the more millennial spelling “Ojex,” the last prefiguring the mediatized intrusion of the tech-world in that pluralizing letter “X.” [2] For many drivers, offering rides to paying customers is not supplemental work, but rather the primary, if unstable, source of household income. For customers, ojek is the most direct means of getting to their destinations, but they must haggle with the stereotypically brusque ojek driver for a service that costs more than a bus but less than a taxicab.

When Go-Jek entered the market, the “market” as such did not formally exist. Instead, ojek were usually organized into local territorial units; they were small-scale and spatially-organized fraternities that permitted and tolerated each other’s claims to operate in shared zones; at stereotypical worst they were opportunistic operators out to maximize profit and expose their customers to risk. With its simple and well-designed smartphone application, Go-Jek rationalized existing habits of travel and transaction, offering users affordable, dependable, fixed-rate and safe rides through the city by harnessing the desirable aspects of moto-mobility to the convenience of cashless and traceable transactions. The company won hearts by integrating traditional ojek drivers onto its platform, outfitting the nondescript “man of the street” with a corporate identity, a new look, and performance-based benefits.

In the space of a few years, Go-Jek became Indonesia’s first “unicorn,” acquiring over $1.2 billion of venture capital funding, a transnational team of engineers and developers, 400,000 drivers, and 16 distinct services ranging from food delivery to digital payment. The Go-Jek driver in his frog-green jacket and shiny helmet is a new social figure (see Barker et al. 2013), an example of a striving micro-entrepreneur with access to health care and control over his labour and income. Women have also broken into the paternalistic transportation sector by signing on with Go-Jek. Indeed, the positive reputation of Go-Jek drivers is itself a marketing coup. Instead of “one laptop for every child,” the on-demand economy in Indonesia is forging a new standard for connectivity and transparency with one smartphone (bought on company credit) for every (poor) Indonesian who finds him or herself an “empowered worker” in this new economy. The ojek has transformed from a means to an end; the focus shifts from the travails of passage through the city to the branded emergence of a new social figure, the modernized Go-Jek “partner.”

This narrative of transformation – from the unbranded, informal, and crisis-related ojek into Go-Jek, the e-commerce darling of Asia – tells a story of how local entrepreneurship can produce an effective and humanitarian market-based solution to urban inequality, merging the technocratic dream of nationalist urbanism (Kusno 2013) with neoliberal beliefs about individual freedom and responsibility. Go-Jek is one of several ride-hailing companies currently operating in Indonesia, and the growth of the private transport industry has prompted uneven state responses; car-sharing apps like Uber are more tightly regulated and in direct conflict with powerful and monopolistic taxi companies, while motorcycle-based services have too much indigenous and populist flavor to prompt the same level of state regulation. 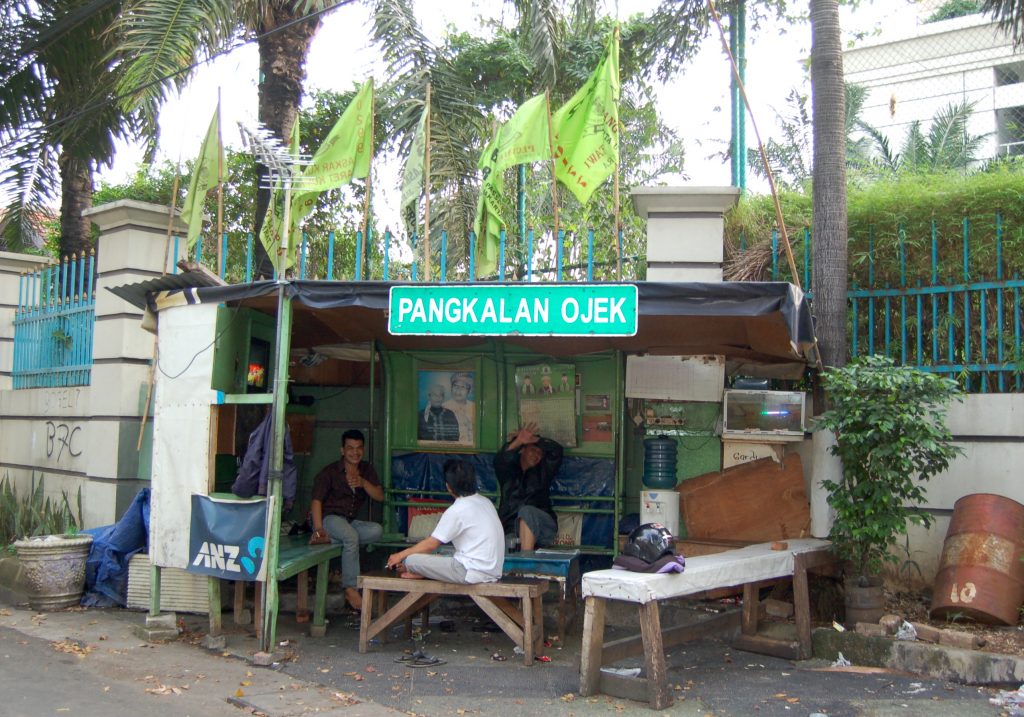 What is less apparent is that Go-Jek’s inclusive innovation constitutes a regulatory force that privileges the consumer-based values of the middle class and “corrects” the unruliness of the city even while it attracts the poor with its technologized charisma. The potential of disruptive technologies to become a mode of inclusion – actively formalizing informal bonds and organizations, seamlessly integrating local groups, and lessening the burden on local knowledge by equipping drivers with GPS to navigate the notoriously complex city – also generates new pains for those left behind. The rationalized city dissolves even those microbonds of territoriality found in the pangkalan ojek (ojek stand), leaving out those who are deemed too old, unable to learn new technology, and widening further the gap between the banked and the unbanked – in short, those whose lives and values cannot match the neoliberalized standards of urban citizenship. It is no coincidence that urban conflict spiked in the remaining tenure of Jakarta Governor Basuki Tjahaya Purnama, or Ahok as he is known. Ahok, the Christian and ethnic Chinese governor, earned the ire of urban poor communities displaced by several normalization (normalisasi) projects that aimed to turn Jakarta into a clean, modern, and smart city à la Singapore. Urban poor communities resisted these middle-class visions of urban development, and instead supported a candidate whose performance of cultural and religious solidarity with the “informal sovereignty” (Barker 2016) of Islamic organizations and vigilante groups (organizations popular with ojek drivers) compelled the grassroots. Ahok was subsequently convicted in a blasphemy case that muddled the issues of urban governance with popular unrest and displacement.

As the cities of Southeast Asia – Jakarta, Manila, Singapore, Bangkok, Kuala Lumpur – move toward a model of urban development designed to make each city more global, more infrastructurally sound, more financially integrated, and more ostensibly creative (in the model of Richard Florida’s creative cities), we must account for how urban development recasts urban citizenship and belonging along biopolitical and temporal lines. This is a complex task, as Southeast Asians who live in the city and who are poor, aspirational, newly pious, financially precarious, organized and politicized, often make choices that run counter to statist and developmentalist concepts of citizenship. Contextualizing citizenship in the age of disruption demands no less than understanding the relation between the futurity of the ideal citizen and the life trajectories eliminated by such visions. I see expressions of nostalgia as one such instance of relationality, a form of acknowledgment that certain groups have already been relegated to living in the past, even as they struggle to find their moorings in the present. 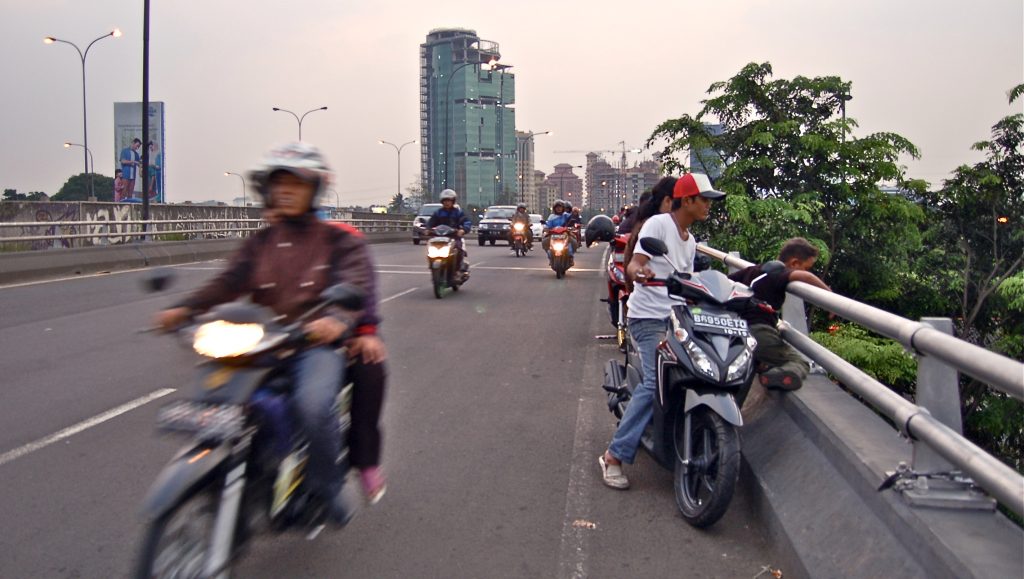 Motorcycles on a flyover in Jakarta. Photo: Doreen Lee, 2013.

The pre-political figure of the ojek driver continues to haunt the streets as a victim of modernity. Now that Go-Jek has achieved market dominance, the same class and generation of users who see their streamlined access to moto-mobility as a right cultivate a philanthropic style of media charity, humanizing the traditional “old” ojek by sharing on social media life-stories of the informal ojek drivers they meet. These Facebook posts and blog posts circulate the portraits, names and phone numbers of kindly ojek drivers, encouraging their social networks to patronize the authentic individual rather than the anonymous corporation. Such sentimental stories often receive a great deal of interest in the media. Whether it is touting the services of roadside food vendors with similarly heart-wrenching stories of poverty and hard work, or seeking out the elderly ojek who supports his family, the presumed interpersonal contact between different classes of people in the city replicates the feeling of an earlier non-competitive way of life in Indonesia, bound to class hierarchies and patron-client obligations. The nostalgia surrounding the figure of the honest [old] ojek driver is consistent with the confusing cultural turns of Go-Jek’s disruptive technology, a unifying and equalizing platform that has deterritorialized and professionalized services once associated with the readily available and close-at-hand underclass patronized by their social betters.

The relationship between local innovation and the globalized tech world is grounds for fertile experimentation. The urban and peri-urban poor, the so-called “vote banks,” are the labour pool supporting futuristic visions of the city, now donning new uniforms and titles as pro-poor and peer-to-peer platforms transform everyday habits. They are the blue dots circulating on Google Maps, coming to you. Grafting technologized knowledge onto what “locals” are supposed to know intimately, that is, the city, enables outsiders and new migrants to no longer learn the city in the old way. The ojek was once a superior resource of local geography. Ask and you shall receive a complex and knowledgeable answer of turn left-left-right-left-right. How is the man of the street to compete with Google Maps’ ability to either make the city legible or its tendency to drive you into a ditch?

Doreen Lee is Associate Professor of Anthropology at Northeastern University. She writes on urban politics, publics, and identities, and is currently researching changing values and precariat economies in urban Indonesia. Her book “Activist Archives: Youth Culture and the Political Past in Indonesia” (Duke University Press, 2016) explores the historical emergence of youth as agents of change in authoritarian Indonesia. Her article on “absolute traffic” received the 2015 IJURR Best Article Prize.