It is common to describe all new applications of technology as “disruptive”. It matters how we use this definition, however, because, like technology itself, disruption is “neither good nor bad; nor is it neutral” (Krantzberg 1986: 545). Disruption – though it is always characterised as unexpected – is a sociotechnical process involving actors, motivations and winners and losers. Innovation scholarship identifies a political economy aspect to disruptive technology use: creating a new market, or a change that requires a leap of faith on the part of adopters (Raynor et al. 2015). These characteristics imply that unless we look at why certain actors are creating disruption, we miss both the nature and the effects of that disruption. This is particularly important when considering urban “disruptive” technological innovation.

If urban scholars are to go beyond an approach that addresses the creation of the technological city as a slash-and-burn approach, aiming to radically reorder the social in the mode of Le Corbusier or Robert Moses, new options must be explored. Most of the “smart” technology being built into cities happens gradually and is layered on top of existing city processes. In order to understand how new technologies may be disruptive in the city context, we should pay attention to how their insertion affects the distribution of resources and power in urban governance, who is setting the change in motion and how, and how the new technologies position the city within new value chains (Taylor and Richter 2017).

Sensor technologies are particularly central to this data-power-production dynamic, as the city’s traffic, both organic and inorganic, becomes increasingly monitored. These technologies are used to manage and control the city’s day-to-day processes; they serve as a tool of governance, allowing city authorities to map and influence people’s activities and engagement with each other. This essay explores how, and why, they may be seen as disruptive technologies, offering a political economy analysis of smart city dynamics.

If we take a broad lens and identify urban sensor technologies as anything that digitally measures change and activity within urban space, these range from nanosensors embedded in concrete infrastructure capable of monitoring activity of various kinds (Rivano 2017), to people themselves, who act as sensors when they move through the city carrying connected devices such as phones or tablets. These data emissions form a kaleidoscopic map of moving Wi-Fi and Bluetooth signals, picked up by sensors in shops, stations and city infrastructure such as smart lampposts. The GPS sensors on their phones and the metadata from their communications emit a continually updating record of their location. These records pass to commercial data intermediaries who aggregate and market them to urban authorities for event management and crowd control (Heerschap et al. 2014), and to corporations to produce new services and products. 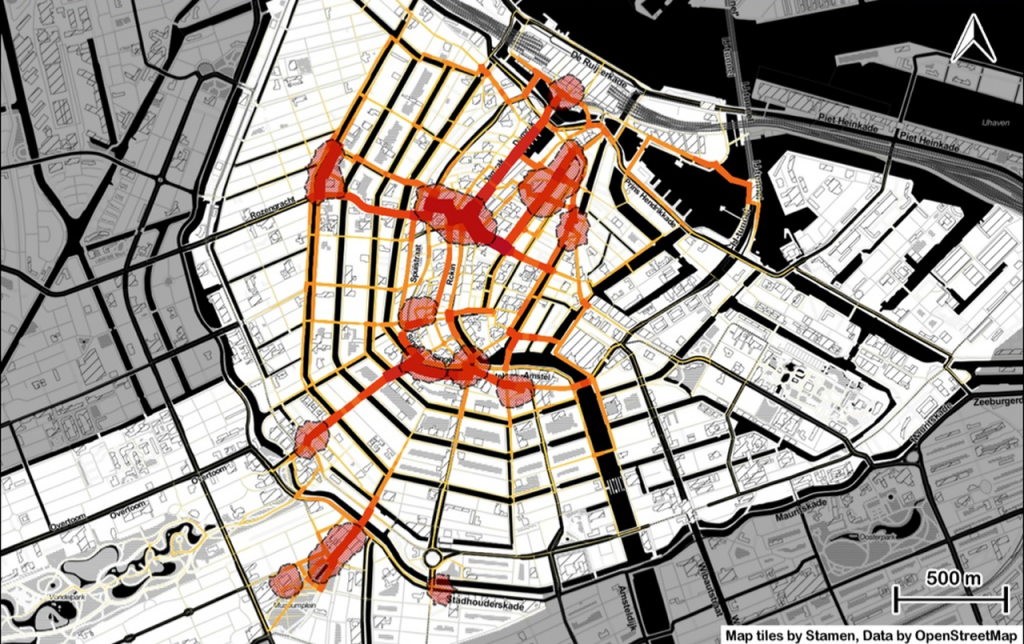 Adding another dimension, people also willingly act as sensors by describing their environment and activities in real time on social media. These data are collected and aggregated by services such as Social Glass, then sold on to city authorities to be merged with other forms of sensor data to provide a multidimensional perspective on human activity in the city. Thus: one’s phone GPS signals say “I am at a football match”; the sensors in the local environment say “I am with 5,000 people at a football match”; one’s social media signals add, “I think people near me are about to fight”; and the story unfolds before the gaze of law enforcement and other services, told by a mixture of organic and inorganic actors simultaneously.

This is one story, but others are also possible. If we add in to this informational spectrum data from smart energy meters and connected buildings, we can explain people’s movements and feelings in more detail, and use these explanations to influence their behaviour. Environmental sensors that measure sound and air quality can tell us about socioeconomic activity, privilege and inequality; smart lampposts and other connected infrastructure can not only sense but sell, providing offers and nudges to visit particular businesses. Seeing is increasingly related to selling, so that narratives about public and commercial benefit are increasingly becoming conflated. For example, a firm offering “social retail for smart cities” promises not only to use sensors to ping passersby with special offers from local shops, but also to inform them of public service announcements and give directions to official buildings. Google’s public transport “solutions” channel customers to Uber instead of informing the city that public transport is overloaded (Harris 2016).

This means that the range of multidirectional engagement between people, the material city and services – mediated by the whole range of sensors – becomes a market for information. This is a disruptive innovation: the capability of the city to provide a constantly updating guide to capital and consumption, feeding a market for urban data that goes far beyond urban governance, and using public authorities, services and infrastructure to create new streams of data.

Some of this is new. Cities have long been described as surveillant assemblages (Haggerty and Ericson 2000), as laboratories for surveillance (Harris 2014) and as sites of experimentation for military technology (Graham 2011). The scale and joined-up nature of the phenomenon is a new development, however: Wood (2017) has suggested that the presence of sensing technologies in cities is now so universal that we should begin to speak of “planetary urban surveillance”. What matters about this, beyond the scope of surveillance and the potential it offers for both control and experimentation, is the distributed directionality and intent that this new networking of data production indicates.

Dalla Corte et al. (2017) have pointed out that the term “smart city” is a misnomer, suggesting that instead we should be referring to “instrumented urban environments”. This is a useful warning, because it points out that it is not “the city” that is monitoring behaviour but actors who increasingly include public institutions, academic researchers and corporations. This is an inevitable result of the shift in the distribution of activity and responsibility for monitoring the city toward a hybrid public-private model (Colona and Jaffe 2016) – a model that increasingly relies on public-private space (Nissen 2008) to function.

In this model, the city becomes a single, evolving machine for creating commercial visibility (Taylor and Broeders 2016; as opposed to Scott’s governmental legibility [1998]). Following Wood’s description, this visibility relies on a network of networked sensors whose data can be produced, accessed and used not only by state or city authorities but also by the private sector: by service providers such as Cisco and Intel, by platform providers such as Google and Uber, and by data intermediaries who sell data on the open market as a commodity. 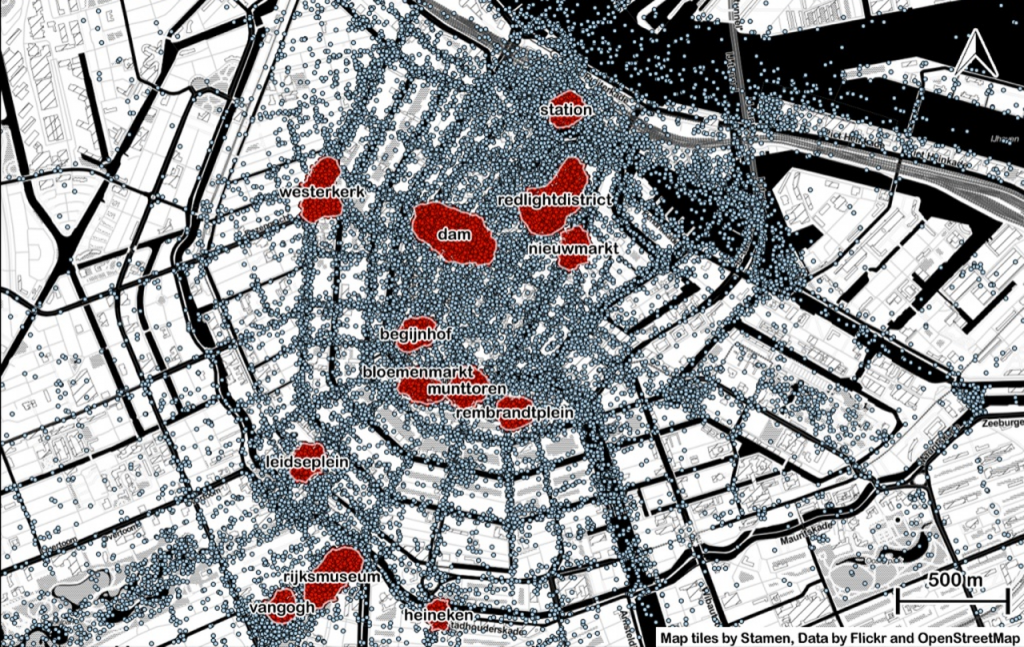 Visualisation of places commonly visited by tourists in the city center of Amsterdam. Source: Social Glass.

This landscape aligns with Cohen’s vision of the global data market as a “biopolitical public sphere” (Cohen 2017): although data may be generated under the auspices of the public sector, they increasingly flow toward a constellation of multinational corporations engaged in farming people for behavioural data through platforms, services and public-sector governance. Their profit comes from aggregating and reselling data doubles, both on the individual and collective level (Taylor et al. 2017).

If the city is seen as simultaneously creating and consuming digital visibility, what precisely is being disrupted by these disruptive sensor technologies? For one thing, the public-private value-chains involved are largely invisible to those living in the city, and rely on a narrative that people’s data are collected and used toward public-sector, democratically accountable ends (Taylor and Richter 2016; Taylor et al. 2016). Although all the forms of sensing described here are funded by tax money, the ultimate profit is increasingly generated by the data market and accrues largely to commercial actors. In this scenario, the city authorities’ ability to use data for public benefit becomes just a byproduct of the commercial relationship between the city’s infrastructure (including humans) and the marketers of behavioural data.

Perhaps the deepest disruption occurring here is that government is becoming a less important actor than its private contractors in the process of generating public-sector data, and increasingly risks losing access to the data that are generated. The ultimate consequences of this shift are currently unknowable. They are also largely inscrutable, due to the black-boxing of data collection and service provision. To surface the processes involved necessitates an anthropological focus on elites – a notoriously difficult challenge – and further linking surveillance studies, critical data studies and other analytical lenses to the empirical data produced. If we “follow the disruption”, however, research may be able to chart the evolution of a new market-oriented politics of urban data, with far-reaching implications for urban governance worldwide.

Linnet Taylor is Assistant Professor of Data Ethics, Law and Policy at the Tilburg Institute for Law, Technology, and Society (TILT). Her research focuses on global data justice – the development of a conceptual framework for the ethical and beneficial governance of data technologies based on insights from technology users and providers around the world.

Heerschap, N., Ortega, S., Priem, A., and Offermans, M. (2014, May). Innovation of tourism statistics through the use of new big data sources. In 12th Global Forum on Tourism Statistics, Prague, CZ.

Wood, D. M. (2017). Urban surveillance after the end of globalization. A Research Agenda for Cities, 38.

Scott, J. C. (1998). Seeing like a state: How certain schemes to improve the human condition have failed. Yale University Press.